WorldNetDaily has been seeking proof that Obama is actually qualified for the office of President based on the requirements of the US Constitution ever since “Mr. Community Organizer” first took office.  Obama, for his part, has reportedly spent over a million dollars in lawyers fees to prevent his birth certificate from being revealed.

Not exactly a glowing endorsement for Obama’s ethics and integrity, if you ever thought he had either. (I don’t, for the record. My dog Tuco has more integrity than Obama!)

What’s fascinating about this ongoing debate is that the main stream media completely ignores this most pressing of questions.  And it *is* a pressing question. 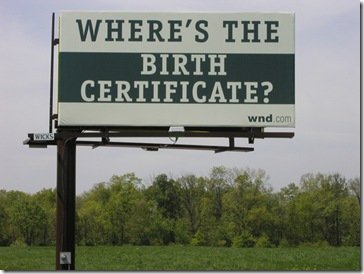 For if Obama can ignore the most basic requirements of the US Constitution, that of being a “natural born citizen”, then he’s not bound by ANY of the limitations of that incredible document.

A recent CBS–New York Times poll showed only 58 percent of Americans  even think Obama was born in the USA. But as the above-linked article states, you had to search for that…

They didn’t report it in the main poll results.  Go figure!

But what prompted me to write about this today was a story coming out of wnd.com that discusses how the media corporations who control the majority of the billboards in America were refusing to allow WND founder Joseph Farah to buy advertising space for his “Where’s the Birth Certificate”? campaign.

That in itself isn’t really surprising.  Mainstream media corporations are never much for dealing with inconvenient truths.  But what struck me as odd, if not actually disgusting, was that these same companies were completely willing to accept advertising from anti-God groups, like the humanist Center for Inquiry.

Center for Inquiry is an innocuous sounding name for yet another God-hating group of people, and they’ve recently kicked off a national billboard campaign that says plainly”: 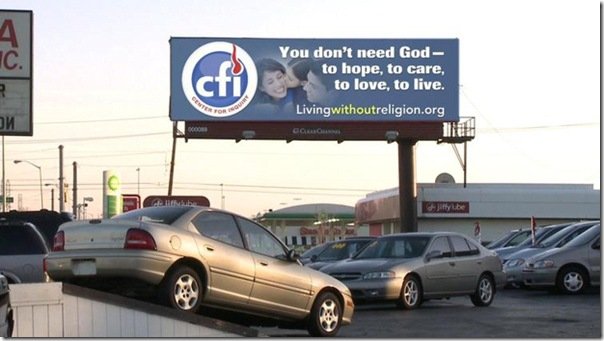 WND’s Joseph Farah had a predictable response to what he refers to as a “morally-bankrupt double-standard”.

“Ironic, isn’t it, that in the United States of America, the country that invented the First Amendment as a means of limiting government’s power over the people, that major media corporations would be timid about popular advertising that might appear critical of a certain government official while having no qualms about unpopular advertising that belittles the role of God?”

Farah’s got a valid point.

I don’t care whether you AGREE with the constitutional requirement or not.  That’s not the issue.  The issue is whether or not the man sitting in what is arguably the most powerful political office in the world is legally eligible to sit there in the first place.

It’s about integrity, not politics.  It’s about obeying the highest law in the land, the US Constitution. 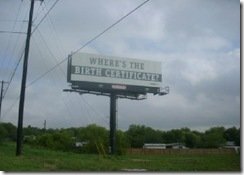 What I am surprised about is that he could think that hiding the fact of his eligibility won’t have consequences in 2012.

While the US Supreme Court continues to duck the question, State Legislatures are not.  Texas, for example, is introducing legislation that will require a presidential candidate to prove their eligibility to run for the highest office in the land.

That brings the total to 11 state legislatures that are now considering presidential eligibility bills. More will likely follow, since the mainstream media, while fully endorsing the questioning of God, refuse to allow any questioning of Obama.

New Hampshire last year adopted HB1245, but it requires only a statement under penalty of perjury that a candidate meets the qualification requirements of the U.S. Constitution, which is something similar to what the political parties already state regarding their candidates.

Other plans were considered last year in Texas, South Carolina, Oklahoma, Missouri, Minnesota, Maine and Arizona, and Arizona’s probably got the closest to law, falling a “pocket veto” short in the state Senate, despite widespread support.

Yes, there IS a God.