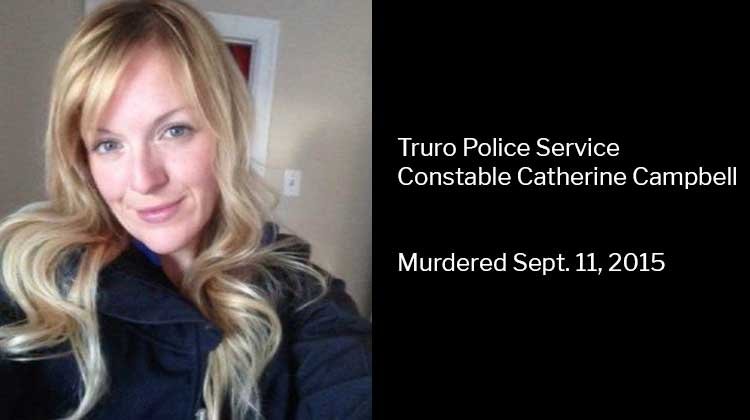 When Catherine Campbell didn’t show up for work on September 14th,2015, she was presumed missing by her employer, the Truro Police Service. They notified Halifax Regional Police and, together, launched an intense missing person search to locate her.

Police quickly established the last time Campbell was seen alive was at a downtown Halifax bar the night of September 11th.

Video footage from The Alehouse showed her leaving with a man bar staff identified as Christopher Garnier, a former employee.

Garnier broke up with his girlfriend the day before, and needed a place to crash. When asked where he was the night of the 11th, Garnier told police he spent the night at the apartment of his friend, Mitch Devoe.

Devoe spent the night in the drunk tank.

Devoe spent the night in the drunk tank. When he returned home the next morning, both the mattress and bedding for his pull-out couch were missing. They were never recovered.

When interviewed by police on September 14th, investigators saw blood on the floor near the couch and on other objects in the room. This information was passed on to the investigative triangle heading the inquiry.

EXPLANATORY NOTE: An investigative or command triangle is a team of three police officers – Team Commander, Primary Investigator and File Coordinator – for a major case investigation, who, in addition to their individual responsibilities, are jointly involved in making key decisions about the investigation.

At this point, Christopher Garnier became a person of interest in Catherine Campbell’s disappearance.

Detective Constable Neilsen was the primary investigator of the command triangle. Early in the morning of September 15, 2015, Neilsen identified Garnier as the murder suspect in her police notebook.

“This was a homicide investigation regarding Catherine Campbell and the suspect was a person by the name of Chris Garnier.”

Garnier was placed under covert surveillance. He was their only suspect.

Members of the Halifax Regional Police Service discovered Campbell’s body the next day.

Prior to that grisly discover, police interviewed Christopher Garnier. They audio-recorded the interview with Garnier’s permission but they did not advise him of his rights to silence or his right to seek counsel. This statement was ruled inadmissible by Justice Joshua Arnold. (see R. v. Garnier, 2017 NSSC 338).

The rationale for this exclusion is simple. Police should have informed Garnier of his rights as soon as, in their eyes, he became a suspect in Catherine Campbell’s murder. They did not.

Police arrested Christopher Garnier approximately 1:20am, September 16, 2015. Police interviewed him again, this time on video and with his knowledge. During this interview Garnier confessed he punched Ms. Campbell twice in the face, breaking her nose and then strangled her until she was dead.

When this statement was challenged in court it was ruled admissible.

At his sentencing hearing, Justice Joshua M. Arnold outlined the horrific events of Constable Campbell’s death. Nothing the judge learned during 18 days of pre-trial motions and five weeks of trial gave any insight into Garnier’s motive for the murder.

[14] There is no evidence to explain why things went so wrong once Mr. Garnier and Ms. Campbell entered the McCully Street residence. What is clear is that shortly after they went into the McCully Street residence, Christopher Garnier punched Ms. Campbell in the face, broke her nose, stunning her, and then strangled her for between two and six minutes until she died, all while she was lying on the pull-out couch.

[15] Video and forensic evidence confirm that after strangling her to death, Mr. Garnier put Ms. Campbell’s body into a wheeled recycling green bin. He put garbage bags on top of her body in the green bin to hide her body. He then wheeled her through the North End of Halifax, dropped her down a small cliff, dragged her through brush, and eventually put a large box used to house feral cats on top of Ms. Campbell’s remains in an effort to further hide his crime.

The jury delivered guilty verdicts on both charges after just 4.5 hours of deliberation.

“We’re very pleased the jury reviewed the evidence and came to the conclusion they did. We’re very pleased for the Campbell family, who’ve conducted themselves with dignity throughout this entire thing and pleased they have justice for their daughter,” said Crown attorney Christine Driscoll.

Disgraceful Decision an Insult to Veterans

“Courts have consistently held that a sentencing court’s application to the principles of sentencing will be influenced by the presence of a mental illness. In such circumstances, the primary concern in sentencing shifts to treatment as the best means of ensuring the protection of the public and that the offending conduct is not repeated.”

To add to this insulting interpretation of court sentencing trends, Pink said the government, specifically Veterans Affairs Canada, must pay the costs of his PTSD treatment because Garnier’s father, a veteran, was also diagnosed with PTSD.

Someone in the Department of Veterans Affairs agreed to pay for the treatments, although nobody, including Minister Seamus O’Regan can explain why.

“I have reviewed the department’s findings on this issue, and I am directing them to ensure the services received by a family member of a veteran are related to the veteran’s service and where they are not, that the case be reviewed by a senior official.”

“Going forward, treatment benefits will not be provided to a veteran’s family member who is incarcerated in a provincial or federal facility.”

This change in policy is the direct result of the embarrassment caused by the decision to pay for Christopher Garner’s PTSD treatment.

Christopher Garner appealed his conviction for murder. He also appealed the sentence, specifically the number of years he must serve before he is eligible for parole.

At issue is the eight-hour police interview admitted into evidence, during which Garner confessed to murdering Catherine Campbell.

His legal aid lawyer, Roger Burrill, says his client tried to invoke his right to remain silent but police did not respect his decision.

It’s a right to remain silent, not a restriction on the right of police investigators to speak.

Courts have ruled police are under no obligation to stop talking to a suspect even if they do invoke their right to silence.

Burrill applied to be removed from the case, citing issues with the defendant’s father. That application has since been withdrawn.

On December 3, 2019, several news outlets reported Nova Scotia Supreme Court reserved its decision on whether it will allow the appeal. They gave no timeline for their decision.