I was reading through an article my fellow unindicted co-conspirator Jane Gaffin urged me to peruse on LogisticsMonster.com called “A Cloth Coffin for Lady Liberty.”

It’s a very interesting piece about an islamic march on the White House by a bunch of America-haters who want to implement sharia law in the United States.

I say “America-haters”, simply because I don’t know what else to call people who leave their own country, come to America and then proceed to try and destroy the very country they fought long and hard to come to.

Makes no sense to me south of the border any more than that moronic mentality makes any sense here in Canada.

Now, while the article goes on to make some interesting statements, and quotes some even more interesting diatribes from the America-haters, what almost made me pee my pants with laughter was the image (below) that suddenly popped onto my screen!

Bear in mind my mental state as I’m reading this article.  It’s a serious piece on a serious issue.  So I’m in serious-mode, right?  I mean one of the comments is that these haters want islam in the White House, and the writer of this article makes a simple, yet valid point:

What a bunch of dumbasses; Islam is already inside the White House.

The man has a point.  Obama is a muslim.

He’s in the White House.

He hates America too.

The writer then goes on to say,

Have you ever wondered when ‘moderate muslims’ are going to stand up and tell their crazy brethren to ‘Shut The Fuck Up’ and go back home to a shariah owned country?

Another valid point.  I keep hearing talk about the so-called “moderate muslims”, but nowhere do I ever see any denouncement of their murderous muslim brethren.

But I’m digressing yet again.

Because right after I finished reading the paragraph that starts with the line above, I scrolled the web page to read on and was confronted with this: 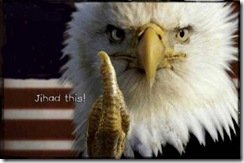 After a couple of pages of serious stuff, it’s no big stretch to figure out why I almost peed my pants with laughter, is it?

I mean that’s one pissed off American Eagle with the Universal Symbol for “don’t f**k with me” flying high and proud.

It just wasn’t what I was expecting to see when I scrolled down the page.  But it probably should have been!

Jane, my friend, thank you for a great laugh, unintended though I’m sure it was.