In Canada it is legal to film police while they perform their duties in public. Unfortunately, too many police officers believe the opposite and violate our rights, often with violent consequences to the photographer.

Michael Farkas is one man who paid a high price for photographing police. That price came in the form of a brutal beating at the hands of Niagara Regional Police Service Constable Paul Zarafonitis. His lack of knowledge about a citizen’s right to photograph police is the core of the issue, followed closely by his second abuse of power, the beating and arrest.

About 1:00am on Saturday, May 19, 2012, photographer Michael Farkas was taking pictures of a rap artist competition at the Kool Katts Caribbean Restaurant. As happens fairly regularly with this restaurant, someone called in a noise complaint about Kool Katts. Police responded, sending 10 officers to the scene.

Constable Zarafonitis was the first officer to arrive.

He went inside to deal with the noise complaint, and during this time he and another officer were photographed by Michael Farkas. Farkas followed Constable Zarafonitis outside as he ejected a drunken patron from the venue and continued to photograph events as they unfolded.

The scene outside was loud, the crowd was drunk and rowdy, and many agitated patrons were yelling and screaming at the officers. Justice Fergus O’Donnell would later describe the crowed as “drunk, aggressive and confrontational.”

During this time Michael Farkas stood on the sidewalk, out of the officers’ way, and continued to photograph.

When Farkas refused to obey his unlawful order, Constable Zarafonitis arrested him for public intoxication. During the course of the arrest Constable Zarafonitis, who is about twice the size of Michael Farkas, punched Farkas in the face, breaking his nose, orbital bone and cheek.

Farkas was taken to a police holding cell, where he spent the night. When he was finally released, he went directly to the hospital to have his injuries dealt with. That’s when the photograph below was taken. 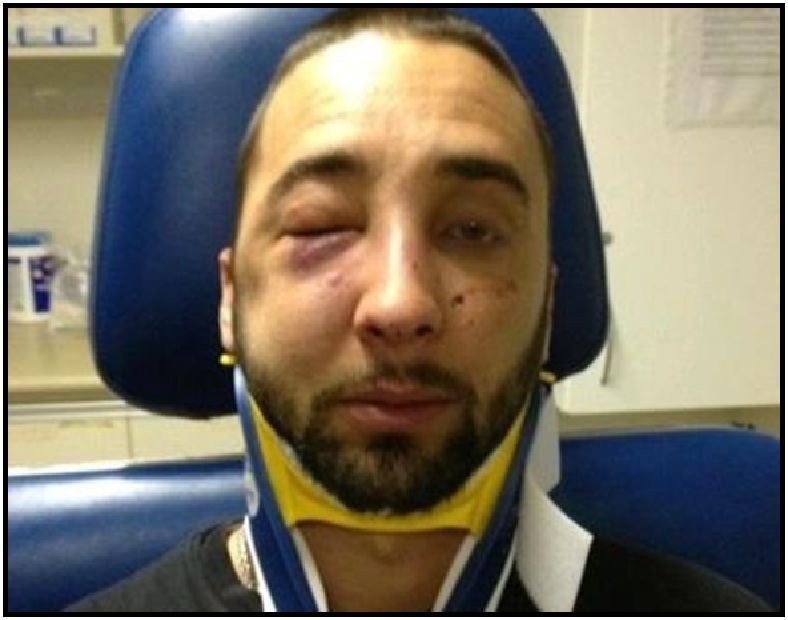 All charges against Michael Farkas were dropped.

Michael Farkas’ civil lawsuit against both the Niagara Regional Police Service and Constable Paul Zarafonitis is, as far as I can determine, still before the courts.

To his credit, Constable Paul Zarafonitis took responsibility for his actions and spared the court the time and expense of a trial. He apologized to Michael Farkas in what is described as a sincere and honest apology.

On February 5, 2014, Constable Zarafonitis also pleaded guilty to one count of discreditable contact under the Police Services Act and was sentenced to the loss of 39 hours of pay.

While Farkas was pleased to see Constable Zarafonitis plead guilty, he wished the constable had told the truth about the beating he delivered that night.

“It wasn’t just one punch. It was multiple punches. If you are going to apologize, at least apologize for what you did,” Farkas said to the Niagara Falls Review.

“The direction to Mr. Farkas to stop photographing was itself an abuse of authority, committed in very close temporal connection to the excessive use of force.”

The scene outside the restaurant was filled with drunk people screaming obscenities at police officers. They undoubtedly felt outnumbered by the hostile crowd.

That scene does not give Constable Zarafonitis grounds to order Michael Farkas to stop photographing the scene, let alone punch him violently in the face.

Justice Fergus O’Donnell spent considerable time on the legality of Zarafonitis’s order to leave the area and stop photographing. This is a lengthy quote but one, I believe, provides necessary context.

In the course of submissions, I asked Mr. McKay whether or not the direction to stop photographing was a lawful direction.  I eventually got an answer that I take to be the only sound answer to that question:  unless Mr. Farkas’s presence or actions were creating a danger to him or others, ordering him to stop photographing was not a lawful command on Mr. Zarafonitis’s part.

This is not a trivial matter.

The suitability of an absulute discharge requires consideration of all of the surrounding circumstances.  I am faced with the rather peculiar situation where Mr. Zarafonitis was faced with a loud and aggressive assembly but instead chose to focus his substantial legal and physical power and authority on the person who was taking photographs of the police-citizen interaction.

I obviously cannot read Mr. Zarafonitis’s mind, but his focus on Mr. Farkas in light of the picture painted for me by the agreed statement of facts reflects an odd sense of priorities.  Mr. Farkas was not arrested for obstructing police or for breach of the peace or for causing a disturbance but for the rather minor provincial offence of being intoxicated.

His arrest was preceded by a direction by Mr. Zarafonitis to move away, which may or may not have been lawful, and a direction to stop photographing, which on the facts before me had no lawful basis.  That latter direction, therefore, was another occasion that night when Mr. Zarafonitis overstepped his powers.

Police-citizen interaction typically involves a significant power imbalance.  Just as judges should be hesitant to second-guess police decisions often made under stress without time for long reflection in back alleys late at night, we have to recognize that the citizen on the other side of that interaction, who may or may not have committed an offence and who is entitled to the protection of the rule of law, is also often alone in a back alley late at night.

In the absence of an overarching and tangible safety concern, such as telling a photographer at a fire scene to back away if there is a danger that the building will collapse on him, telling people not to record these interactions, whether they be a bystander or the person the police are dealing with, is not a lawful exercise of police power.

An officer who conducts himself reasonably has nothing to fear from an audio, video or photographic record of his interaction with the public.  The public has a right to use means at their disposal to record their interactions with the police, something that many police services themselves do through in-car cameras and similar technology.

The officer’s powers exist to allow him to protect the public and himself and to enforce the law; they do not extend to controlling the public record of what happened.

The maintenance of that public record plays a significant role in the maintenance of the rule of law.  The existence of this form of objective “oversight” has great potential to minimize abuses of authority and to maintain peaceable interaction between police and the citizenry, all of which is very much in the public interest.  Interference by a police officer in the public’s exercise of that right is a significant abuse of authority.

Sentencing on the Criminal Charge

Constable Paul Zarafonitis was given a suspended sentenced with probation for one year. He was also ordered to provide a DNA sample, pay a $50 victim surcharge fee, and perform 40 hours of community service.

He was also ordered to stay away from both Michael Farkas and his wife Tanya.

“You are not to be within 50m of any place you know that Michael or Tanya Farkas lives, works or attends school or religious services or any other place either of them is known to you to be unless that presence is reasonably necessary in the course of your employment with the Niagara Regional Police Service or is necessarily incident to court or Police Act proceedings.”

“The direction to Mr. Farkas to stop photographing was itself an abuse of authority, committed in very close temporal connection to the excessive use of force.”

In light of the judge’s comments in this case, I contacted the Niagara Regional Police Service to find out what actions, if any, were taken to ensure all police officers understood citizens have the right to film police.

“Thank you for reaching out. Due to the depth and nature of your inquiry we would require you to submit a Freedom of Information Request to obtain the information you are looking to achieve.”

My request is for “copies of any directives, training memos, orders or instructions given to members of the Niagara Regional Police Service regarding the right of citizens to film police in the performance of their duties.”

Ms Sabourin’s request for an ATIP is totally understandable. I’m asking for what has the potential be a lot of information dating back about eight years. It will take them a little time to dig through their records.

I mailed my Freedom of Information Request, along with the applicable fee, to the Niagara Regional Police March 15, 2020.

When I receive a response to that ATIP request I will update this article with whatever information the Niagara Regional Police Service provides.