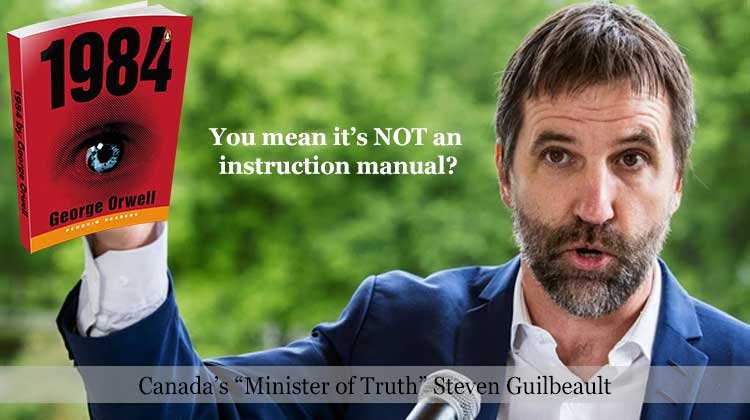 Freedom of Speech is a fundamental right of all human beings.

If this Liberal government wants me to give up right to free speech and beg for their permission to speak they’d best come with a bevy of armed Thought Police thugs because the only way they will shut me up is if they kill me.

George Orwell’s classic 1984 is not an instruction manual. It’s a dire warning about where free societies like Canada end up when we don’t stand up to tyrannical fascists like the Trudeau government wants to be.

The Internet is today’s equivalent of the Town Square. If I don’t need government permission to stand in the Town Square and speak my mind, I certainly don’t need it to post my thoughts on my blog or social media platforms.

As a writer often critical of the political class in newspaper articles, internet commentaries and books, free speech is the foundation of who I am and everything I do.

A government license to speak my mind on the internet?

I already have a licence. It’s called the Charter of Rights and Freedoms.

2. Everyone has the following fundamental freedoms:

The Broadcast and Telecommunications Legislative Review Panel report is the latest step in a censorious process that began in November 2018, when Finance Minister Bill Morneau announced a $595 million slush fund to subsidize “independent news media.”

Morneau claimed this slush fund was necessary to “protect the vital role that independent news media play in our democracy and in our communities.”

Government control of the media through subsidies for approved outlets undermines the very concepts of free speech and freedom of the press.

Morneau failed to see the irony that a government subsidy removed the independence from “independent news media.” They are now beholden to the government to keep the cash flowing.

When the government appointed Unifor, the militant union representing journalists (and staunch Liberal Party supporter), to the panel who determines which news outlets qualify for subsidies, it became abundantly clear those who write favourably about the government will receive taxpayer support.

True small independent media outlets were out in the cold.

But this slush fund was just the beginning of a much wider and deeper plan to censor Canadians from the public square.

On May 15, 2019, at a Paris meeting dubbed The Christchurch Call to Action, governments and social media companies pledged to eliminate terrorist and violent extremist content online.

The following day, Justin Trudeau announced his Digital Charter – a program he claimed would build a foundation of trust in online news sources by policing the internet for hate and misinformation.

“The platforms are failing their users. And they’re failing our citizens. They have to step up in a major way to counter disinformation, and if they don’t, we will hold them to account and there will be meaningful financial consequences.”

That same day, May 16th, in Ottawa, Liberal MP Randy Boissonnault mused about the potential cash cow these compliance fines represented while speaking as a member of the Standing Committee on Justice and Human Rights.

“How do we stop the hate from having a platform? In the United States, if you take a look at privacy laws, you’ll see that there is a $40,000 U.S. fine for every privacy breach. What if we held the platforms accountable every time they posted something hateful online? For every view, there could be a $25,000 fine. Don’t you think they would move quickly?

“I just used privacy as an example. We could have heavy fines of the ISPs [too].”

At that same May 16th meeting of the Standing Committee on Justice and Human Rights, Liberal MP Nathaniel Erskine-Smith proposed the following:

“If someone is at the extreme level of a Whatcott or Your Ward News, we bring to bear the criminal law or some more appropriate financial sanction through the Canadian Human Rights Act, if section 13 in some fashion were to be revisited. However, for someone who just posts a hateful comment online once, wouldn’t it be more appropriate and efficient to have an administrative system that is flexible and efficient, that would say there’s going to be a $30 to $50 fine and don’t do it again?“

Section 13 of the Human Rights Act was arguably the most vile and censorious piece of legislation in Canadian history. Its repeal was a victory for all Canadians, as it had a 100% conviction rate. If you were accused, you lost, because truth was no defence and the presumption of innocence did not apply.

So the Liberal government is determined to be the arbiter of what is true and what is not, of who is permitted to speak and who is not. And if you don’t comply, you will pay.

But do we really want another bloated government bureaucracy, this one devoted to trolling social media platforms and blogs to find “offensive” comments so they can levy Boissonnault and Erskine-Smith’s fines?

Which brings me back to the events of the past few days.

The report, written by The Broadcast and Telecommunications Legislative Review Panel headed by Janet Yale, offered the government 97 recommendations.

“We wanted to recommend measures that would address that financial crisis in the industry,” Ms. Yale said.

Her fundamental assumption is flawed, which results in a fatally-flawed report to the Liberal government.

Government must not be in the business of determining which companies survive and which companies don’t. It’s not the government’s job to ensure any industry survives in the marketplace. This applies to the news industry as well as every other industry.

“That was the focus of our recommendations. It has nothing to do with regulating news or determining what sources of news people can have access to,” she continued, before stating the CRTC would be the sole arbiter of who was and was not “practising journalism.”

So while Minister Bains hides from reporters and allows Minister Guilbeault take all the heat, Guilbeault clearly misread the mood before he appeared on CTV’s Question Period with Evan Solomon on February 2, 2020.

“As far as the licensing is concerned, if you’re a distributor of content in Canada… and obviously if you’re a small, very small media organization the requirement probably wouldn’t be the same as if you’re Facebook or Google. So there would have to be some proportionality embedded into this but we would ask that you have a licence, yes.”

That clip went viral on the Internet and Guilbeault seemed shocked to find himself at the centre of a media and online feeding frenzy.

“I don’t see what’s the big deal,” he said, incomprehension written all over his face.

“Let me be clear. Our government has no intention to impose licensing requirements on news organizations nor will we try to regulate news content.”

That’s not what he said yesterday.

Who knows what he’ll say tomorrow, but one thing you can bet your Right to Free Speech on is this – we haven’t heard the end of this government’s censorship agenda. Not by a long shot.

They’ve invested too much political and financial capital in driving it forward.

All that remains to be seen now is how we mere citizens of Canada respond the next time they raise up this albatross’s rotting corpse and attempt to make it fly.