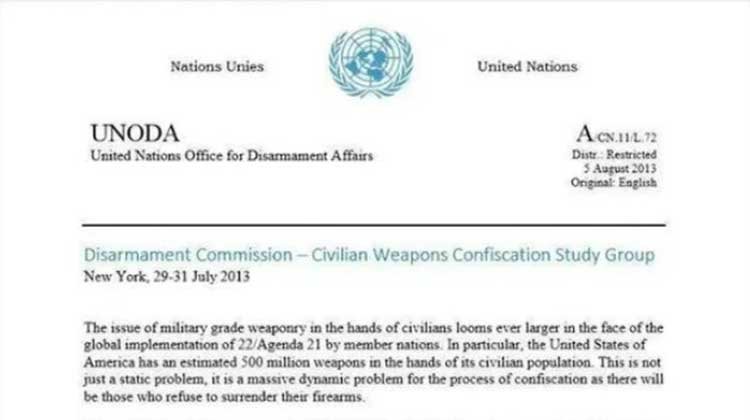 On its surface, the document titled “Disarmament Commission – Civilian Weapons Confiscation Study Group” floating around social media looks real. It’s written in the language of UN bureaucrats and even includes what appear to be hallmarks of an official UN document.

It sets gun owners’ hair on fire because it hits the hottest of hot buttons – firearm confiscation.

Except it’s not real.

“This is a false claim that was debunked back in 2013,” John Ennis, a UNODA senior political affairs officer, told AFP FactCheck in December 2019.

That didn’t stop PPC candidate Mark Friesen from sharing it during the 2019 federal election campaign, nor has it stopped others from spreading around social media since.

UNODA exists. Their mandate is to cool off conflict zones, not disarm North American civilians.

UNODA supports the development and implementation of practical disarmament measures after a conflict, such as disarming and demobilizing former combatants and helping them to reintegrate in civil society.

After it first surfaced in 2013, Politifact researched the document’s veracity.

Superficially, the document has the trappings of officialdom — a blue U.N. logo at the top, along with the name of the United Nations Office for Disarmament Affairs, a real office. It’s dated Aug. 5, 2013, and labeled “restricted.” The headline reads, “Disarmament Commission — Civilian Weapons Confiscation Study Group.” And it’s filled with believable bureaucratic jargon, such as creation of a “codification framework” and the need to undergo a “full review by the Office of the Secretary General.”

Then Politifact checked with the United Nations.

“I checked the document number on our internal document system, and the reply I got back now was simply, ‘There is no document matching your request,’ said Farhan Haq, associate spokesperson for the Secretary-General. “The document number (A/CN.11/L.72) doesn’t conform to our standard system, in any case.”

In addition, Haq said, “there is no such body as a ‘Civilian Weapons Confiscation Study Group.’ Nor does the United Nations involve itself in confiscating weapons from member states.”

Finally, Haq said, “the use of blue ink, some of the type font and the scanner icon in the bottom right-hand corner are not found in real U.N. documents. So, in several different ways, this document is fake.”

Snopes, whose leftist political slant often makes them a less-than-credible source, dug up the original document identified by the barcode, lending further credence that the document is not real.

Although UNODA is a real office within the United Nations, it has not created a “Civilian Weapons Confiscation Study Group” with the goal of disarming civilians in member nations. The document shown above is a fabricated one, as evidenced by its invalid document number (A/CN.11/L72) and the fact that the bar code and QR code shown at the bottom of the document (which uniquely identify a UN document) match those of a completely different document. This image is actually an altered version of an older document (A/CN.10/L.70) from October 2012 which simply announced an upcoming substantive session of the Disarmament Commission to be held in April 2013.

We do ourselves a great disservice when we share fake documents like this without doing basic research. My Google search today showed dozens of links identifying this document as a fake.

The NRA/ILA, when issuing their own press release about this, expressed a valid point all of us need to heed.

As we’ve pointed out before, a degree of skepticism regarding these sorts of rumors is healthy and necessary. Gun owners should resist the urge to forward, and thereby propagate, these rumors before verifying their authenticity. As always, the truth should be our standard.