New Brunswick’s Jeff Young is an outspoken advocate for our firearms community. He’s also been working day and night since June 26, 2018, to ensure Liberal MP Karen Ludwig’s defeat in October.

Ms. Ludwig (New Brunswick Southwest) is well aware of Jeff Young’s opinion of her, and his commitment to defeat her. She is rightly terrified his efforts will be successful.

Why? Because he is determined, relentless and he could cost her a gold-plated MP pension.

Here’s Jeff’s original post, in its entirety (his 2017 post referenced in his current one). As you can see, she removed a definitive portion of his statement. 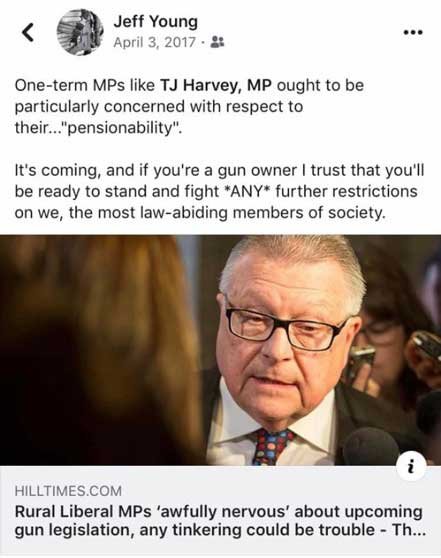 By cropping off the last line, Ms. Ludwig deceitfully attempted to twist Jeff’s post into a physical threat against her.

Even with his last line deleted, getting to “physically threatened” is pretty hard.

Ludwig is an elected public official. Jeff Young has every right to express his opposition to her as the representative for his riding. Moreover, it is his civic duty to help defeat her in the upcoming election if that’s his prerogative.

Jeff Young is doing with Karen Ludwig what I’m doing here in my electoral district of Mission—Matsqui—Fraser Canyon – everything in my power to remove my useless Liberal MP, Jati Sidhu.

He refuses to respond to concerns from his constituents. It’s a common and repeated refrain throughout our electoral district. To this day he’s never once responded to me directly.

I finally resorted to a Letter to the Editor to get his attention, since phone calls, letters and emails couldn’t elicit a response from my so-called “representative.”
That letter, Why is Jati Sidhu ashamed of his riding?, was published in 8 newspapers in and around my riding.

That letter accomplished its goal. Mr. Sidhu finally responded to me….

Does Mr. Sidhu feel “threatened” by my work to see him defeated in Election 2019?

I’m sure he does.

Like Jeff Young is for Karen Ludwig, I am a direct threat to his re-election chances and with it, his gold-plated MP pension. Does Mr. Sidhu’s personal insecurity make my political actions against him criminal?

Of course not. Not even if we use Karen Ludwig’s low bar as the standard.

But here’s the really disturbing part of the story.

Divide and conquer is a longstanding Liberal strategy with the firearms community. It’s also been a hugely successful tactic for them.

Because of Ms. Ludwig’s decision to play the “victim card” and distort Jeff Young’s post to suit her political agenda, this tempest in a teapot has spilled over and now threatens Jeff’s ability to carry on his duties in his gun club.

As one who believes we must stand together, especially in the face of sleazy tactics like those displayed by Liberal MP Karen Ludwig, my sincere hope and prayer is his gun club executive and members see this for what it is – a blatant attempt to twist one man’s words for her political gain.

For if Ludwig is successful in undermining him and his work at his club, she will remove one of the biggest obstacles to her re-election.

No wonder she’s trying so hard to discredit him.