The Canadian election kicked off this week, and the future of civilian firearm ownership hangs on the outcome. That’s bad news for gun owners, given 3 of the 4 possible Election 2019 results are disastrous for gun owners.

The following 3 realities for gun owners and 4 possible election outcomes is adapted from the new book Canadian Gun Owners Guide to Election 2019 (an Amazon Bestseller) written by Christopher di Armani and Nicolas Johnson.

2. Canada’s next prime minister will be Justin Trudeau of the Liberal Party, or Andrew Scheer of the Conservative Party.

If it isn’t Scheer, the hunting and shooting community is toast.

The Conservatives are the only party who both supports firearm users AND has the opportunity to defeat the Liberals and form government.

3. If you vote Conservative in a riding they can’t win, you will indirectly elect a Liberal government and lose your guns.

If you vote Libertarian, People’s Party of Canada, or for other small parties in Election 2019, you may as well surrender your guns today.

Election 2019 has one of four probable outcomes. Only one of them keeps us safe from Liberal plans to eliminate our community, our culture and our guns from Canada.

Here’s the analysis of what happens in each scenario, from worst to best.

If the Liberals form a majority government, they will implement their plans for the biggest round of gun bans and confiscations in Canadian history.

If the Liberals don’t win enough seats to form a majority government, they will need the support of another party to remain in power. In this scenario, all options against firearm users are on the table.

Since four of the five main parties want gun bans of one form or another, a coalition government would be a minor inconvenience to forcing gun owners to leave our homes, surrender our firearms, or face jail.

Whether they partner with NDP, Greens or Bloc Que?be?cois, the Liberals could ban guns as easily as if they had a majority.

A minority Liberal government would probably also remain in power until the next scheduled federal election in 2023.

A Conservative minority government opens up another terrifying yet very real possibility.

An opposition party, say the Liberals, introduces legislation to ban and confiscate guns. They could gang up against the Conservatives using the NDP, Greens and Bloc Que?be?cois to push this legislation through.

Imagine this nightmare scenario: massive gun bans and mass confiscations imposed under a Conservative prime minister. Is this realistic? In our current political climate, yes.

If the Conservative Party forms a minority government, our guns may be safe as long as that government stands. The time frame could be as short as a few months or as long as four years, but whatever length of time it is, we’re fighting this battle again in the very near future.

The only way we are safe from government measures against us (until the next election) is if we elect a Conservative majority in 2019.

That’s not a message many gun owners want to hear, especially if they feel closer to the NDP, Green Party, Bloc Québécois, People’s Party of Canada or any other party.

Like it or not, this is the political reality we face in Election 2019.

About the Canadian Gun Owners Guide to Election 2019

You have hundreds or thousands of dollars invested in your guns and gear. You can’t afford to get this election wrong. 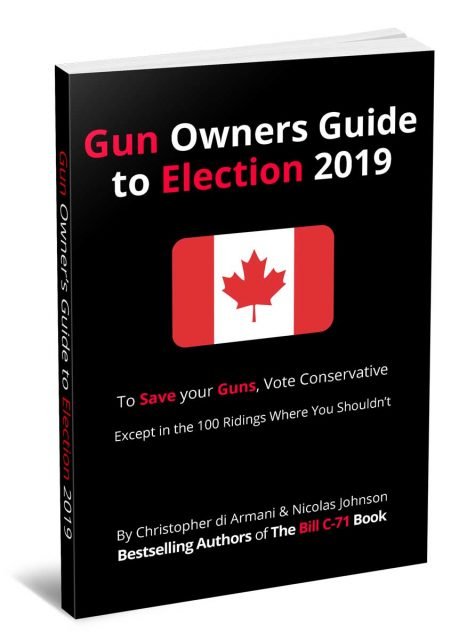