On March 28, 2019, the Director of Ontario’s Special Investigations Unit, Tony Loparco, recommended the following charges be laid against Detective Donovan.

While suspension with pay is a practice I have railed against for decades, in Donovan’s case I fully support it.

Why the departure from my long-standing position against suspension with pay?

Nathan Parker, the cop Donovan is accused of attempting to murder, is a well-documented violent thug with a police-issue badge and gun. Nathan Parker should have been kicked off the police force years ago, but for reasons I’ll never understand, wasn’t.

One of Parker’s victims of police brutality, Wayne Penner, wasn’t surprised to learn who was shot.

“I was not surprised a bit. They should have gotten rid of him a long time ago but nobody listened.”

Philip Parker says his brother probably had it coming.

“Nathan Parker is no innocent person. I can tell you … that if he got shot, it’s because he made the other person fear for his life. He’s a frightening person.

“My brother is a violent man. Niagara should have fired him years ago. Maybe the other officer will face real consequences. Then again, maybe he was defending himself from my brother and his uncontrollable rage. I was on the receiving end of that rage while growing up, so my assumption leans toward self-defence.”

Full Disclosure: I do NOT know Detective Sergeant Donovan, nor do I know much about him. But I do know a lot about Nathan Parker.

If Shane Donovan felt the need to empty his pistol into Nathan Parker, my bet is he legitimately felt his life was in danger.

I’ve written about Parker’s anger management issues in the past. My article titled “Hypocrisy Gone Wild: Niagara Regional Police Constable Nathan Parker files Human Rights complaint after being disciplined for police brutality” is #2 on my top 25 most-read articles of all time.

Both police and court records document many more of his disciplinary issues, as the Toronto Sun reports:

Parker has a history of violence against prisoners with three convictions under the Police Act, during his career. he was docked 120 hours in 2015 after pleading guilty to discreditable conduct and unnecessary use of force against a prisoner.

In 2012, he lost 60 hours pay after conducting his own investigation into a commanding officer who had been cleared of wrongdoing from a previous incident.

The previous year, Parker was found guilty of using unnecessary force and in 2008, he was docked 90 days pay for arresting a cyclist without cause.

In 2007, Parker lost a week’s pay after he was found guilty in a disciplinary hearing for pepper spraying a handcuffed and restrained prisoner in the backseat of a cruiser in 2005.

His own brother is terrified of him.

“Nathan accelerates from zero to maximum rage in one second. He has the emotional stability of sweating explosives. Nathan has the power to crush anyone, and the switch in his brain that prevents violence is defective,” he told CBC news last year.

When news Parker was shot and almost killed by a fellow cop broke last November, my first thought was, “Wow, he finally went too far and threatened the life of one of his fellow cops.”

I have no evidence Parker threatened Donovan. That will, presumably, come out at Donovan’s trial. There are 12 witness to the shooting, all of them cops, so what really happened that day will eventually be a matter of public record. 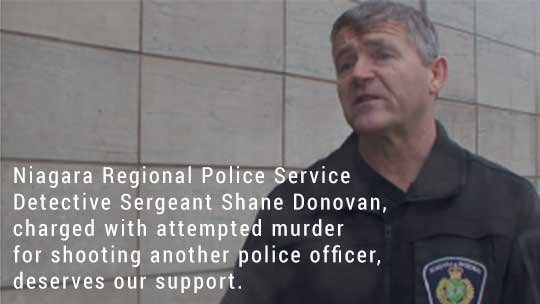 If you would like to send a letter or card of support for Detective Sergeant Shane Donovan, please address it to him and send it to