Throughout our lives, both Lynda and I have taken in fur babies who were abused or abandoned. Last summer we rescued two beautiful little Tabby kittens, the latest additions to our family.

They were so starved they fought each other over the food bowl. That ended pretty fast, though. It didn’t take long for the little fur-balls to realize all they had to do was yell and the magic food fairy would refill the bowl.

Barely a month old, they were so flea-covered their fur looked like a wind-blown ocean. Just horrendous. After washing them with dish soap and flea combing them twice, that problem was solved. 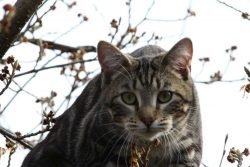 Munchkin (aka Purr Machine) is the outgoing one.

Today he ran screaming up the tree outside my office window so fast I thought he was going to run right up and off the top.

I grabbed my camera and caught him pretending he was a ferocious mountain lion, jaguar or black panther about to pounce on his unsuspecting prey, in this case me.

Meanwhile, his brother Lucky (because he’s lucky to be alive) lounges on the ground below. He’s the thoughtful and deliberate kitten. While Munchkin will run in and out of the house the moment a door is opened, Lucky needs to stretch and mentally prepare himself for the adventures to come.

In this photo, he’s almost glaring up at me, as if he’s demanding to know why his food bowl is still empty. 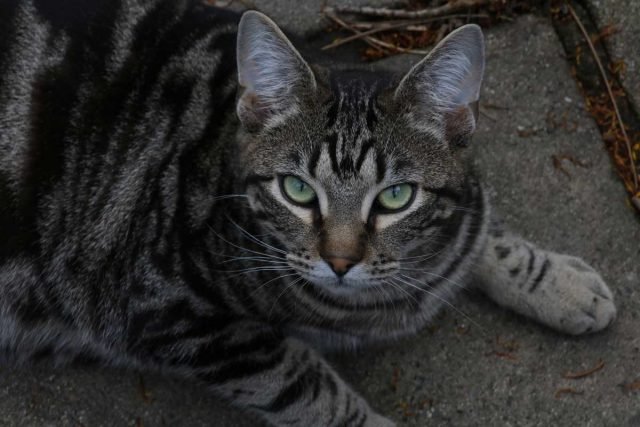