Despite the rhetoric spewing from the Prime Minister and everyone in his office, the SNC-Lavalin scandal was always about votes, not jobs.

So why did Prime Minister Justin Trudeau bury Criminal Code amendments designed to favour SNC-Lavalin deep in the bowels of the budget bill?

Why did he and his minions pressure Jody Wilson-Reybould repeatedly over four months to use this new amendment to benefit SNC-Lavalin?

The company was never leaving Canada.

Canadian jobs were never at risk.

The Prime Minister made it clear to Wilson-Reybould his own seat could be threatened in the 2019 Election should SNC-Lavelin not get what they wanted.

The Globe and Mail reports:

In 2017, the Caisse [Caisse de dépôt et placement du Québec] gave the company $1.5-billion, secured by SNC’s stake in the Toronto-area Highway 407 toll road, to help it buy British engineering firm WS Atkins PLC. Under the deal, the company was required to keep its head office and senior management in Quebec for at least seven years.

If Trudeau and his minions didn’t know about this contractual obligation they were incompetent.

They either knew the truth and are lying to the Canadian people, or they were willfully blind to the evidence staring them in the face.

The only question left is whether they were incompetent, willfully blind, or didn’t care.

Since this was always about votes and not jobs, I suspect they simply didn’t care.

This is not the first time SNC-Lavalin threatened to leave the country. Or their second, or even their third. This is their go-to play when faced with the consequences of their [allegedly] criminal actions.

The company’s former CEO, Robert Card, told senior employees the company could move if it ever faced criminal charges in Canada.

Criminal charges were leveled against SNC-Lavalin in 2015.

Robert Card is no longer CEO.

All this leads Baby Unicorn to ask the Prime Minister one simple question.

Mr. Prime Minister, when will you admit your pressure in favour of SNC-Lavalin was always about votes in the Quebec election and Liberal seats in the 2019 Federal election, not jobs? 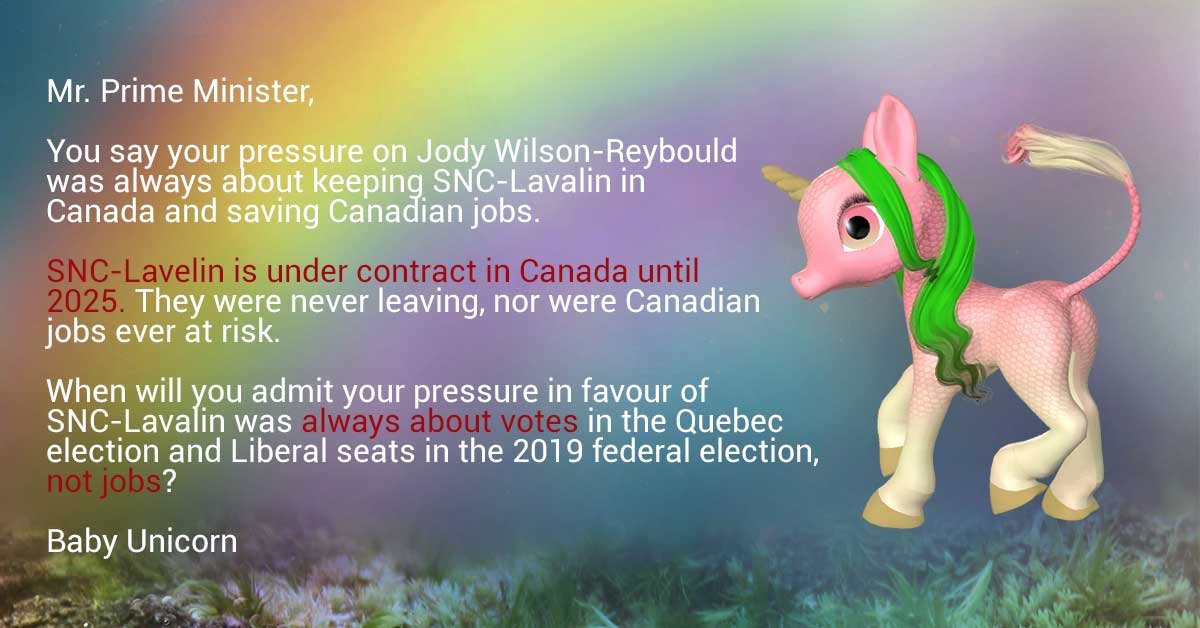