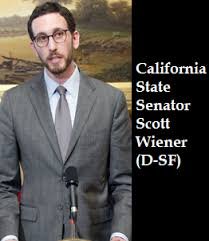 The rationale behind his legislation is for California law to level the playing field between gay and straight offenders.

“For example, if an 18 year old straight man has vaginal intercourse with his 17 year old girlfriend, he is guilty of a crime, but he is not automatically required to register as a sex offender; instead, the judge will decide based on the facts of the case whether registration is warranted. By contrast, if an 18 year old gay man has sex with his 17 year old boyfriend, the judge *must* place him on the sex offender registry, no matter what the circumstances.”

“SB 145 does not apply to intercourse of any kind with minors who are age 14 or younger. For those crimes, mandatory sex offender registration will continue to be the case for all forms of intercourse.”

If that were true, great, but the text of SB 145 does not support this claim. It merely states the convicted sex offender may apply for relief from the duty to register

Regardless of the sex offender’s beliefs, an 18-year-old having sex with a 9-year-old is not “consensual.” Nor is it when a 21-year-old has sex with a 12-year-old.

I’m unclear why Senator Wiener believes these child sexual predators should be exempt from California’s sex offender registry but, should he reply to my request for clarification, I will update this article accordingly.