After reading Bill C-71, The Firearms Owners Harassment Act, and digging into its details, I teamed up with Nicolas Johnson (TheGunBlog.ca) to write the book on Bill C-71. Our goal: help liberty lovers connect with their MPs, engage in the political process and make our views known.

We are grateful to former MP Garry Breitkreuz for writing the Foreword and to the Canadian Shooting Sports Association for their support to make the book available free from StopC71.com.

The official press release is below. 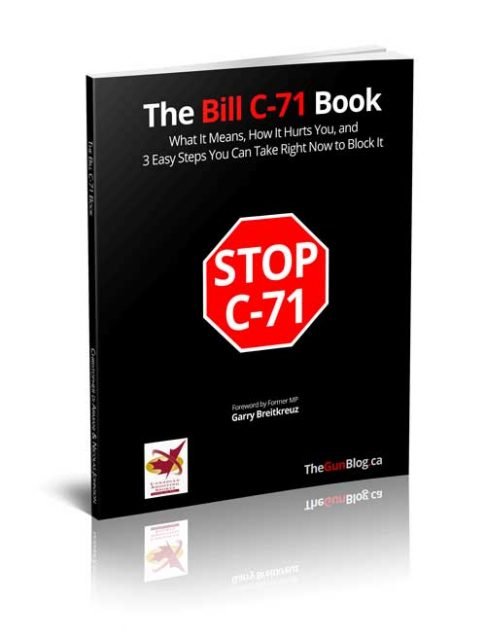 The Bill C-71 Book: What It Means, How It Hurts You, and 3 Easy Steps You Can Take Right Now to Block It is the most comprehensive and easy-to-read overview of the draft law.

The free 96-page PDF e-book is a joint project of the Canadian Shooting Sports Association, the country’s leading gun-rights advocacy group, and TheGunBlog.ca, Canada’s leading source of news on gun politics and the firearm industry.

The book represents a significant milestone in the history of Canada’s firearm community. The Bill C-71 Book marks the first time in the country’s history that a book is published on a draft gun law. It’s also the first major collaboration between the two groups.

The authors are critical of the planned law and urge gun owners to oppose it by engaging with MPs to express their concerns.

The Minister of Public Safety’s bill is directed at federally licensed hunters, farmers and sport shooters who have taken and passed RCMP-approved safety courses and background checks, and are monitored daily by the Royal Canadian Mounted Police. This legislation would impose new restrictions on more than 2 million of Canada’s most scrutinized, most vetted and most responsible men and women.

“We are the staunchest advocates of responsible firearm use and public safety,” said Christopher di Armani and Nicolas Johnson, the authors. “Our concern is that Bill C-71 does not advance public safety. Bill C-71 is all about adding more restrictions on the safest and most law-abiding people in the country.”

Tony Bernardo, the executive director of the Canadian Shooting Sports Association, said: “The government is selling greater restrictions on federally licensed firearm owners as the solution to gang crime. It’s not.”

The book is available for free download as a PDF and e-book in all major formats from StopC71.com, and as a paperback from Amazon.ca.