Did you receive a 2nd NFA Mailout?

If you received the second NFA mailout, please contact me immediately.

As shown on the image below, this second mailing begins:

“There’s a big fight coming. You know it, and I know it.”

I want to get to the bottom of this. The Conservative Party said they would deal with the NFA and put an end to the illegal misuse of their mailing list. That does not appear to be the case.

If you received this second NFA mailout, I urge you to contact me with the following information:

All responses will be kept strictly confidential. Unlike Sheldon Clare, Blair Hagen and the National Firearms Association, I value and will protect your privacy.

PLEASE forward this message to all your Conservative friends. The more information I can learn about this second mailing, the better equipped I’ll be to put an end to this gross violation of privacy rights by the NFA.

The CSSA statement denouncing the NFA’s actions ended with an apt reminder:

One thing is certain. The National Firearms Association has destroyed its credibility with the only political party that supports the private ownership of firearms in Canada, hardly a recipe for effective advocacy work. The CSSA is saddened and puzzled by these actions. They were so unnecessary.

For many years, Canadian gun organizations opposed the long-gun registry. One of the key points was that data on a list could be illicitly obtained and used unethically.

It appears we were right. 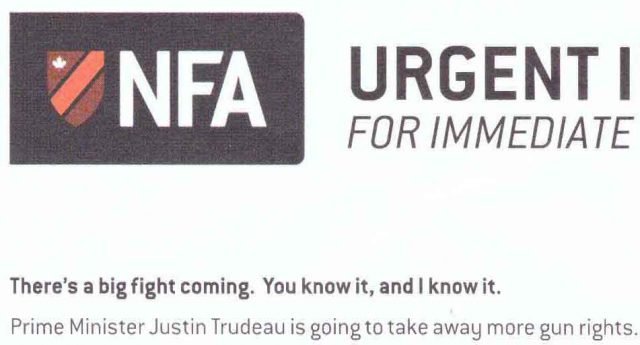