On Monday, June 5, 2017, the Conservative Party of Canada issued a Cease and Desist letter to Sheldon Clare, President and CEO of Canada’s National Firearms Association.

The facts are clear, according to the Conservative Party leadership.  One or more individuals connected to one or more leadership contenders stole a copy of the CPC membership list. The CPC made the list available to all leadership candidates under the express written condition it “only be used within the context of the leadership race.”

“There is no basis upon which the NFA was entitled to either receive or make use of any information or data of the Party.”

The cease and desist letter is the latest step by the Conservative Party to deal with the scandal. While a full investigation is complete, the party has not yet publicly identified the culprit or culprits responsible, nor have they pressed criminal charges against them.

If the Conservative Party wants to maintain any credibility, they must release the name(s) of those responsible for stealing the membership list and those individuals must face criminal charges for theft.

The NFA, its executive officers and board of directors must all face charges for possession of stolen property and profiting from a crime, namely the theft of the mailing list and its subsequent use by the NFA to seek membership and donation revenue.

The NFA has no credibility in Ottawa. They spit in the face of their only potential friend and now wonder why so many people are calling for their destruction.

Neither Sheldon Clare nor Blair Hagen, Executive Vice-President of Communications, will respond to requests for comment.  Perhaps you will have more success than I did.

Their plan, apparently, is to ignore this scandal in the hopes their reprehensible actions will go unnoticed in the wider gun community.

Not on my watch.

Their actions, most likely criminal actions, taint the entire Canadian firearms community. Their lack of integrity, their lack of comprehension of fundamental property rights, and their willingness to profit from the crimes of another reflect on all of us.

I will not rest until every Canadian gun owner is aware of their actions.

Gun owners cannot remain silent in the face of potentially criminal actions by an organization claiming to represent us.

Neither gun owners nor gun clubs can condone the NFA’s profiting from stolen property.

Their unaudited financial statement from the NFA’s 2015 Annual General meeting (page 24, link below) shows 34% of NFA revenue comes from insurance. Membership fees, publications, donations and membership sales generate another 62% of their revenue.

Stop the NFA’s revenue streams and we stop the NFA.

Gun owners and gun clubs must take these steps to ensure the NFA cannot do this again, because even a cursory examination of the NFA’s history proves they will just rinse and repeat. 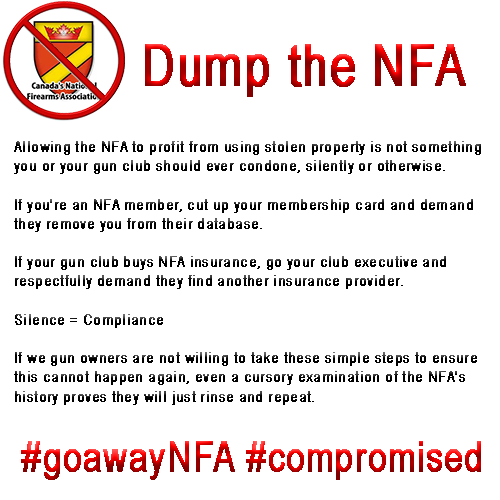