I received an email from a friend earlier today encouraging me to watch a video of Lt. Col. Allen West (retired) as he was campaigning for election in 2009.  I’d never heard of Allen West before, so I was curious, especially given the introduction my friend wrote to the video (below).  Naturally, I checked up to see if what my friend said about West was true, because so often we hear inspiring stories attributed to men that turn out to be exaggerations or flat-out lies. 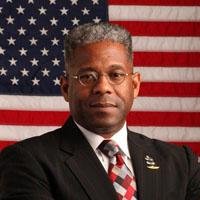 Not so in this case. Well, not exactly, anyway.  The details are slightly off, but the essence is there.  My research said that West fired his pistol past the detainees head, not his crotch.

Lt. Col. West did exactly what he did to save the lives of the men under his command.  And he’d do it again.

At the hearing kicking him out of the military, West was asked by his defense attorney if he would fire his pistol again under similar circumstances. His reply tells me exactly what kind of man West is.

“If it’s about the lives of my men and their safety, I’d go through hell with a gasoline can.”

If I was under his command, that’s exactly the answer I want to hear from my commander.  I want to know without a doubt that the man in charge will do everything in his power to keep me alive in a really crappy situation.

And the politically-correct moron squad in Washington demanded his career be ended as a result.  It figures.  Better that American soldiers be tortured and murdered at the hands of terrorists, than a single terrorist be forced to wet his pants in fear.

Typical response of moronic bureaucrats huddled safely in their office towers, isn’t it.

The email my friend sent me is posted below, but I’ve added the video he wanted me to watch, plus one or two more for good measure, first. What a treat to see a real man tell it like it is, instead of apologizing for his nation everywhere he goes, like that pathetic excuse for a man, Barack Obama.

This is a MAN!

Well worth ten minutes of your time.  If only Canada had someone of such
conviction and honesty …..

Only two blacks were newly elected to congress this cycle, and both are
Republican. Col West is from southern Florida, a bastion of the Democratic
Party.  He won in a walk.

It is well worth the viewing.  This new Congressman was an extremely
popular commander in Iraq.  He was forced to retire because during an
intense combat action a few of his men were captured and were certain to
be tortured or worse.  At the same time his men had captured one of the
guys who were with the Iraqis who captured his men.

Knowing that time was crucial and his interrogators were not getting
anywhere with the prisoner COL West took matters into his own hands.  He
burst into the room and demanded thru an interpreter that the prisoner
tell him where his men were being taken.  The prisoner refused so COL West
took out his pistol and placed it into the prisoner’s crotch and fired.
Then the COL told the prisoner that the next shot would not miss.  So the
prisoner said he would show where the American service members were being
taken.  The Americans were rescued.  Some one filed a report on incorrect
handling of prisoners.  COL West was forced to retire.  COL West was just
elected in November 2010 to Congress from Florida.  During the elections
he was part of a panel on how to handle or how to relate to Muslims.  You
will see his answer here.

Here is one of the new congressmen from Florida explaining very
definitively in just over a minute the truth about Islam. Please watch and
if you agree; please forward it to your friends, if you disagree, please
hit the “delete” button.

Please forward to anyone you think has the capacity to think.

Be sure to suppress all email addresses.