It’s an older news piece but it bears repeating given the current hypocrisy of both Hollywood actors and anti-gun state senators in America. Oh, and in the FBI now too, given their refusal to indict Hillary “Butcher of Benghazi” Clinton even though they admit she broke the law.

In June of 2011 these hypocritical oafs voted 28-8 to exempt themselves from California’s onerous gun laws.

You read that correctly.

The California Senate is rife with hypocrites; 28 of them to be precise.

Where was the public outcry?  Hard to say.  I certainly don’t recall hearing about this at the time and since I love ripping into anti-gun hypocrites and cannot imagine I would willingly pass up such an easy shot!

The California Senate hypocrisy proves that age-old maxim though, doesn’t it?  Gun laws are for little people, or as I prefer to call us, mere citizens. The political class or “our betters” are exempt.  When nobody is paying attention anyway why not put yourself above the law?  It’s too easy.

California Senators to voters: concealed carry is for me, not for thee. 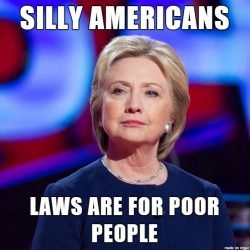 Sadly, the hypocrite class isn’t limited to Hollywood celebrities like anti-gun Matt Damon or State legislators like Missouri State Senator Jamilah Nasheed, either.  As we saw yesterday in the non-indictment of Hillary “Butcher of Benghazi” Clinton, the FBI is riddled with them too.