Have airport Security morons across the globe lost the ability to think?  Or have The Rules become more important than anything… no make that everything else?

That’s sure what it looks like in Britain these days.  They’re managing to make North American airport security morons look positively…  pedestrian.

Julie Lloyd is a Canadian.  She was in Britain in 2009 on holidays with her husband Ken.  She’d bought a souvenir figurine to bring home to surprise her husband with for his retirement.  And not some $10 piece of crap you buy at the airport either.  This was an expensive 9 inch replica of a British soldier.  It was in her carry-on luggage.

The figurine came with its own rifle, a 3 inch knockoff of the SA80 assault rifle. 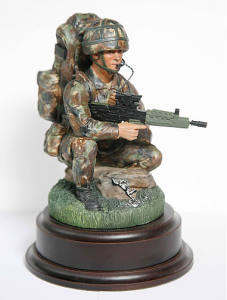 Here’s the problem for Julie Lloyd and her 135 British Pound figurine (approximately $270 Cdn)… the All-Powerful and All-Knowing Regulations say that “no firearms may pass through security.”

A replica firearm, no matter how small, and no matter how impossible it would be to convert the 3-inch assault rifle into firing live rounds, it’s not passing onto the airplane.

Airport Security bureaucrats don’t care.  The rules are ALL IMPORTANT.   Is that Clear?

Us poor peasants that must tolerate these pathetic morons whenever we fly are somehow inferior to these bureaucratic busybodies without the sense God gave a gnat.

Julie was quoted in the British newspaper The Sun:

“The supervisor was confident that, according to the regulations, a firearm is a firearm and cannot pass. The rifle could not travel.”

I’m unclear how the security bureaucrat could read the regulations, since he clearly wasn’t smart enough to have finished grade three.

But such is the nature of air travel these days.

A woman can’t bring an expensive souvenir onto a plane because she might kill someone with it, or God Forbid, take over the plane with the dastardly weapon contained in the souvenir.  How about we just try hanging on to the thinnest thread of reality, okay?

Especially since  minimum-wage employees have direct, full and unsupervised access to every plane sitting on the tarmac, and nobody cares about checking any of them.

“Perhaps its story has become part of Gatwick’s unofficial mythology – how unthinking regulations successfully protected the free world from the threat of terrorism.”

A spokeswoman for Gatwick Airport said:

“Firearms and items with the appearance of firearms are prohibited. There are lots of reasons an item could be prevented from going through security.”

Thank God for the bureaucrats.

How else would we know we were so dangerous?