Life is pretty great, isn’t it? 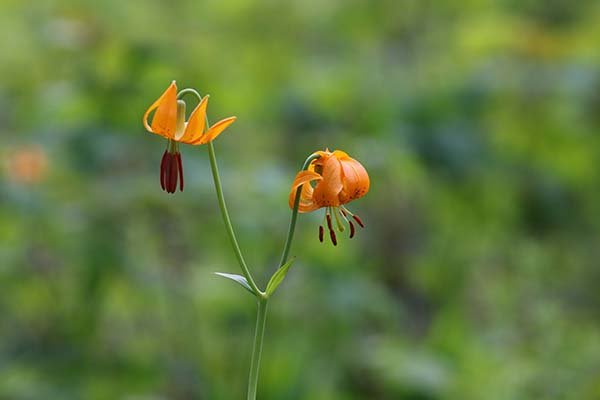 The wild tiger lily is probably my favourite of them all and I never tire of taking photographs of them. They are utterly amazing and they grow almost everywhere. They’re not the only awesome flowers though. 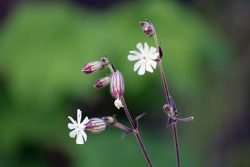 I’m not sure what this little white guy is called but he’s really pretty too. Like the Tiger Lilly this flower grows all over the place.

What prompted my photographic excursion on Saturday was the sound of a red-headed woodpecker calling from one of the trees outside the front door. They’re here all the time and generally aren’t too shy either.

This particular woodpecker has taken to, as part of his daily ritual, hanging out on a tree outside the front door and calling for me. The woodpecker’s bird call is quite beautiful and very unique. You can’t miss it or mistake it for something else. As soon as I step outside and say hello he says hello and then carries on with his day. It’s really quite funny.

This afternoon I was not destined to capture the woodpecker’s beauty on film, but what the heck. Another day, perhaps.

It was a beautiful afternoon and wandering the hillside in the afternoon sunlight… well, let’s just say there are far worse ways to spend your time. 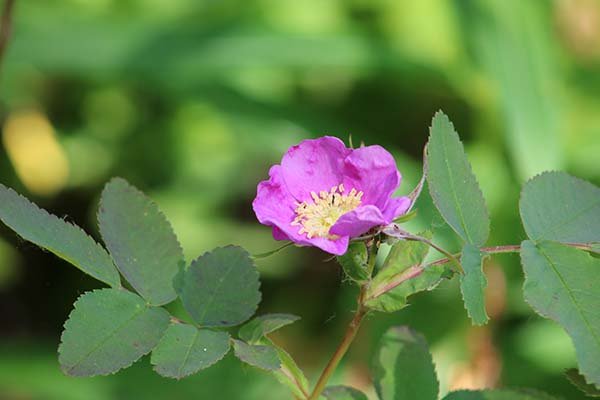 The wild rose is another little beauty. There are large patches of wild rose that, on a gentle summer’s day, cast the most amazing aroma over the mountain. This time of year they’re mostly finished blooming but this little guy is still going strong. 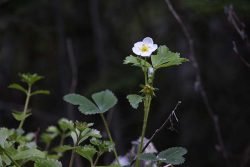 My wife Lynda is a strawberry fanatic. Not so much for the berries, although she does love them, but for the pretty little flowers they have. Really, who can argue? She plants them everywhere. I love it!

This little white strawberry is very proud. He’s only got the one flower but he’s showing it off for all the world to see. I doubt he could stand taller if he tried! 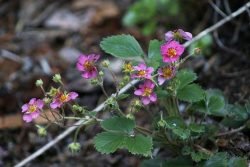 On another bank is his cousin, the pink strawberry. He too stands tall as though in competition for his cousin who lives over in the rotting tree stump.

It would seem not. That special bit of stupidity appears limited to the human race. Plants just carry on doing what they do best. Maybe there’s a lesson in that for humanity? But I digress…

My wife and I, we enjoy and value our privacy. We’re private people and generally like to be left alone. Our neighbours are used to that and don’t bother us much, nor we them.

Sometimes, however, when you least expect it a special neighbour stops by to make your day. 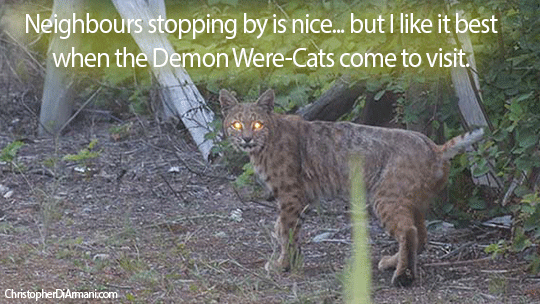 There’s nothing more special than a demon were-cat looking for dinner! And from the look of him he’s not that fussy about what’s for dinner either. We humans may be big but this guy knows we fall down hard!

Yeah, life is pretty awesome, I must admit. Catching sight of one of these majestic critters is rare enough but to have him wander through the front yard like he owns the place? How awesome is that!

What can I say? Neighbours stopping by is nice… but I like it best when the Demon Were-Cats come to visit!

On a more technical note:

As for the demon were-cat effect… I’d set the camera down to do something and then caught sight of this brazen boy walking across the yard. I grabbed the camera, grateful I’d tossed on the telephoto lens earlier, and attempted to catch the bobcat on film. The camera was on full auto so the flash went off, turning a really cool photographic opportunity into something really quite hilarious.

He was only there for a few seconds and my second shot of him didn’t turn out nearly as well as this, nor was it anywhere close to this amusing.