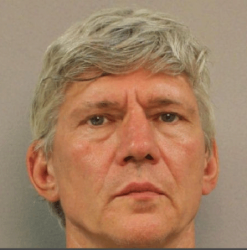 Tony Joe Gunter is the poster-degenerate for why women should own firearms.  He is, by all accounts I could find, a violent and abusive degenerate of a human being.  His very existence tarnishes the images of real men everywhere.

Strong words, yes, but Tony Joe Gunter clearly earned every one of them with his own actions.

For the past two years Tony Gunter was involved with an unnamed Goodlettsville woman in what neighbors described as an abusive relationship.  That relationship ended when she learned of Gunter’s lengthy criminal record.

Tony Gunter didn’t take kindly to being dumped, to put it mildly.  Police say he threatened to kill her and a despite restraining order against him, Gunter had attempted to break into the woman’s home at least three times before.  He had three outstanding warrants for  violating that restraining order.

“I will kill you, you stupid cunt,” he allegedly responded, according to Nashville Metro Police documents.

She finally requested a security alarm be installed in her home and while the installer was performing that installation the poor woman discovered, much to her horror, that Tony Gunter was already inside the house hiding under her bed.  He’d stolen her cell phone so she couldn’t call for help and was just waiting for the alarm installer to leave before, presumably, making good on his threat.

This would be why a gun in the hand trumps a restraining order in court every time.  Had this woman NOT been armed she would undoubtedly be dead.  Why?  Restraining orders are useless against someone who refuses to abide by them, like Tony Gunter.

Seeing her cell phone was not beside her bed where she left it, she was horrified to see a pair of feet sticking out from under her bed.  They belonged, of course, to the abusive degenerate who refused to leave the woman alone.

She drew her gun and shot him in the foot.  Hopefully he moaned and whimpered like a baby, but news reports to not specify that.  What they do specify is that Tony Gunter is recovering in hospital from “non-life-threatening shooting wounds”

The woman will not be charged.

Tony Gunter, however, faces felony charges of aggravated burglary and property theft and four misdemeanor charges of violating a restraining order and one charge of stalking. I would hope this sad excuse for a man would spend a considerable amount of time in prison reflecting on his poor life choices.

The woman can rest easy for the moment knowing the man who terrorized her is chained to a prison hospital bed because she was smart enough to protect herself.

That’s a result I heartily condone.