All in all it was a very busy day!

There are numerous things I find absolutely fascinating about Britain’s decision to leave the EU and the hysterics surrounding it.  First and foremost is that nobody thought it would happen and everybody was shocked when it did.

The problem, my dear Brutus, lies not with the stars but with ourselves.

This describes the problem with the European Union quite perfectly.  Whatever glorious intentions the founders of the European Union envisioned have a century ago they clearly never foresaw their Union overtaken by the bureaucracy they founded.

Mere citizens in Britain are angry, just as they are elsewhere in the world.  On Thursday they took that anger out on the European Union.

What an excellent start. And that’s precisely what it might be.  A start. 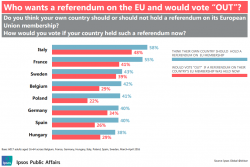 Within hours of the final decision mere citizens in The Netherlands, Italy, France, Sweden, Belgium, Poland, Germany, Spain and Hungary and were already calling for their own nation’s exit votes.

British Prime Minister David Cameron refuses to actually trigger Article 50 of The Lisbon Treaty, which would formally begin the process of taking Britain out of the EU, saying instead

“A negotiation with the European Union will need to begin under a new Prime Minister, and I think it is right that this new Prime Minister takes the decision about when to trigger Article 50 and start the formal and legal process of leaving the EU. I will attend the European Council next week to explain the decision the British people have taken and my own decision.”

Clearly Cameron was shocked at the final result, but he shouldn’t have been surprised at all.  For years Cameron has publicly called for an end to what he refers to as the “bureaucratic nonsense” emanating from the European Union.

Instead of dealing with the issues a body like the EU ought to deal with, the petty bureaucrats inhabiting the EU decided upon another more odious vision.  They would rename everything they disliked and enforce petty and arbitrary rules on the mere peasants who paid their salaries.

Then there’s cucumbers… where the EU dictates what is and is not allowed for that poor vegetable. Commission Regulation (EEC) No 1677/88 dictates Class I and “Extra class” cucumbers are allowed a bend of 10mm per 10cm of length. Class II cucumbers can bend twice as much.

Can you imagine passing a regulation that says you cannot call jam… jam?  That’s the case for Clippy McKenna’s line of jams.  The EU explained her products did not contain enough sugar to qualify for the “jam” title.  She couldn’t call it “reduced sugar jam” either.  The EU dictates “jam” must contain 60% or more sugar and “reduced sugar jam” must contain 50% or less sugar.  McKenna’s jam contains 53-54% sugar, leaving her in a no-jam-name quagmire.

“This is nonsense as we have been backed into a corner over what to call our products, which are made to my much-loved jam recipe. We’ve already had to re-label everything once at the behest of the EU and now we are being told that we are still wrong. What are we supposed to call our jams?”

Yes, the petty bureaucrats in Brussels want to micro-manage every detail of your life.  Thank God the Brits came to their senses and voted to get out of that nightmare.