There’s nothing quite like a gun show to get you over feeling badly about the fact your friend died and that’s precisely what awaited me Saturday morning here in Whitehorse!

Paul Rogan, publisher of Canada’s one and only firearms buy and sell newspaper “Canadian Access to Firearms“, puts on the annual spring gun show here in Whitehorse and it’s a very well-attended affair.

I arrived about a half hour after the gun show opened and the place was wall to wall people.  But more important than all the people… the room was filled with guns!   Yes, I must admit seeing all those gorgeous pieces of metal proudly displayed by their owners was exhilarating.

While I stood there taking it all in Paul Rogan comes over and greets me in a way only this lively Frenchman can.

“Christopher!  So good to see you!  Listen. I got this guy you gotta meet.”

And he drags me away down a line of tables to meet Terry Green, one of the Canadian Shooting Sports Association’s (CSSA) British Columbia representatives.  Terry and I both live in BC, yet like lawyer Richard Fritze the day before, it took a trip to Whitehorse to finally meet face to face.  Life is funny that way.  Terry and I talked a while before Paul came back and interjected.

Terry, we’ll meet you at…” and he rattled off the name of a restaurant I can’t remember now.

Bear in mind this was not a request.  Terry and I were having breakfast with Paul Rogan the following morning.  No question!  The only detail to be worked out was what time that inevitable event would take place!

Paul Rogan is truly a gem of the Yukon.  No, he’s a gem of a human being.

Even odder than going to Whitehorse to meet Terry Green was finding the gregarious owner of Hofstedes specialty food store, Richard Procee, standing before me.  I’ve known Richard for a number of years now through church, but it was utterly hilarious to hear his booming voice say, 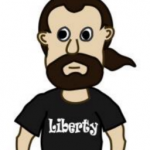 He’s looking at my T-shirt with my Liberty Guy avatar on the front and website URL below.  When he finally looked up at my face I just smiled and said,

We laughed, exchanged explanations of why we were here before he introduced me to his entourage as only Richard can.

“This is that libertarian writer I told you about.  I’ve got his card on my wall!  I heard his name on television the other day because he’d pissed off Chilliwack City Council.”

An explanation of that series of events ensued which, in Richard’s usual style, made me laugh even more.   (In a nutshell the City of Chilliwack is currently implementing “Spot Zoning” to profit developers at the expense of the mere citizens of that fine city.  I expressed my displeasure to them in writing.  They are most unhappy with me as a result.)

The fun and frivolity of finding Richard Procee here in Whitehorse aside, the Whitehorse gun show was one heck of a great event.

Yukon MP Ryan Leef flew in from Ottawa and made his way to the gun show in the early afternoon.  I found him to be an intense man of strong convictions.  I liked him immediately.

Mr. Leef took the time to answer my questions on a wide variety of subjects and I’ll be writing a series of articles based on my interview of him today in Whitehorse in the near future.

Ryan Leef won the last election over Liberal incumbent Larry Bagnell by a slim margin primarily because Larry Bagnell decided to be Ottawa’s representative to The Yukon, not The Yukon’s representative to Ottawa.  He told Yukoners he would vote against the long gun registry when in Whitehorse but the second he returned to Ottawa he couldn’t vote fast enough to keep the gun registry, just as Liberal party policy demanded.

Yukoners didn’t like being lied to, it appears, and Conservative candidate Ryan Leef won the election.  He’s represented the Yukon Territory well over the past four years according to everyone I talked to at the gun show.

Allen Carlos met up with me and we chatted about Life, the Universe and Everything for a while until our conversation was interrupted by a little man in a big hat.

“Hi, I’m David McWhinnie.  Do you remember me?” he asked Allen.

Allen’s mood chilled considerably and I instantly knew why. David McWhinnie is the Crown prosecutor who put Allen Carlos through the legal wringer for 4 long years.  McWhinnie appeared to want forgiveness or something.  It was an odd conversation, as though now that the trial was over Allen Carlos should consider him a friend.  Very odd indeed, and Allen wasn’t buying.  Not for a second.

After an awkward 5 minute conversation where McWhinnie expressed his condolences at the passing of Jane Gaffin he finally left, but not before I confirmed what I already knew from Jane herself.

“Is it true you threatened to sue Jane Gaffin for libel?” I asked.

“I’d say threatened is a strong word.  I’d say Jane and I came to an arrangement where she could continue to write about the case.”

“So basically she told you to pound sand and you caved?”

Allen Carlos smiled at my question.

David McWhinnie gave me an odd look and an even odder explanation; that Jane’s book took on a different tone after he threatened to sue her.

While I’d have to re-read her book on Allen Carlos to see if McWhinnie’s version of events holds any water at all, knowing Jane Gaffin as I did makes me pretty skeptical.  It seemed more likely to me that David McWhinnie told himself whatever he needed to in order to get past the unkind things Jane wrote about him.  Guess I’ll have a better idea of McWhinnie’s truthfulness after I re-read Jane Gaffin’s 800-page book on the Allen Carlos case, “Justice Served Up Yukonslavia-Style.”

Gun folks are some of the best of our nation, David McWhinnie’s claims of gun ownership  notwithstanding.

It’s a fact a couple of other political parties don’t much like.  They do their level best to paint us as “killers-in-waiting”, “undiscovered right-wing terrorists” and all around “scary people” but the truth is that we are the farthest thing from it.

All in all I’m very grateful I got to spend my day with hundreds of those law-abiding citizens today here in Whitehorse.

It’s odd… for folks like me (and perhaps like you) there is no place I feel safer than in a room filled with guns and gun owners.

So how come Liberals and NDPers are so terrified of that very same room filled with metal masterpieces and mere citizens?