I’ve been in Whitehorse roughly 30 hours now and as I wander the streets of this beautiful little city I’ve been blown away by all the beautiful street murals that adorn buildings all over town.  I’ve taken a ton of photographs of them because they truly are works of art. 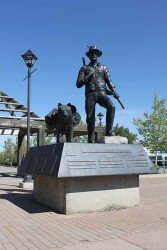 Seems God made sure I would stumble across the artist of these fine pieces of art as I strolled around Whitehorse, my camera recording everything I found of interest.

After returning to Red Square for more shots of the Prospector statue with Jane Gaffin’s name on it I wandered down by the SS Klondike paddleboat display on the Yukon River at the far end of town.  There I noticed something I hadn’t seen the evening before when I came down here.  A beautiful mural on the back of a shed of three galloping white horses.  A ladder stood nearby, as well as a milk bucket of paint supplies. 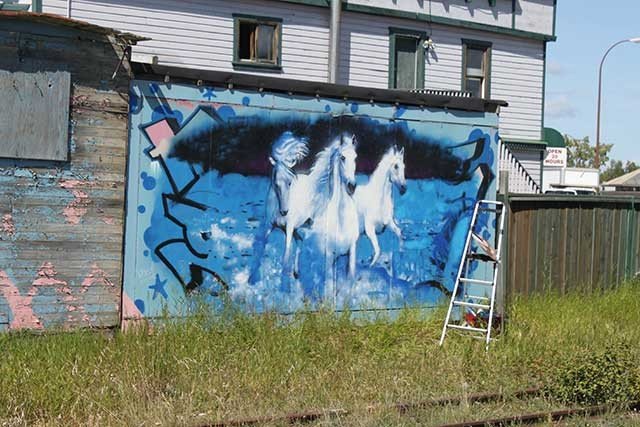 I took a few photos of the fascinating scene before me when a guy wandered into my view.  He waited respectfully for me to finish shooting the mural before walking on.  As I turned away I noticed he stopped at the ladder leaning against the wall, leaned down and picked up some painting.

I turned back and asked if he was the artist.

“You do beautiful work,” I said.

His only response? A humble “Thank you.”

I commented that I’d been wandering all over town taking photos of the murals that dotted my travels around the downtown streets.

“Most of those are mine,” he said quietly.

He asked if I was from Whitehorse.

“No, I flew up yesterday morning for the funeral of a friend.”

He offered his condolences and then explained the mural hadn’t been there this morning, that he’d been painting over the graffiti someone had painted over his original piece.

“That explains why I didn’t see it when I walked past here last night.”

“It’s even better than the first one, so it’s not a total waste,” he said quietly.

“It’s such a shame that some jerks feel the need to destroy things just for fun,” I replied.

He said he just wanted to make things beautiful and that he didn’t get paid for any of his murals.  He simply wanted to make Whitehorse a more beautiful place when he was gone than it was when he arrived.

“Life is so short, so fleeting,” he said referencing my friend’s recent death. “That’s why I do this.  I just want to make a difference.”

“Do you mind if I take a few pictures of you with your mural?” 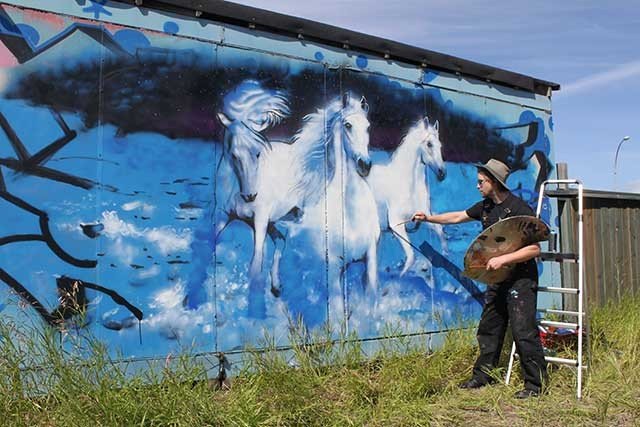 “Thanks Colin, for your beautiful artwork.  Have a great afternoon.”

“You too,” he said cheerfully as I left him to finish his repairs on the three white horses… 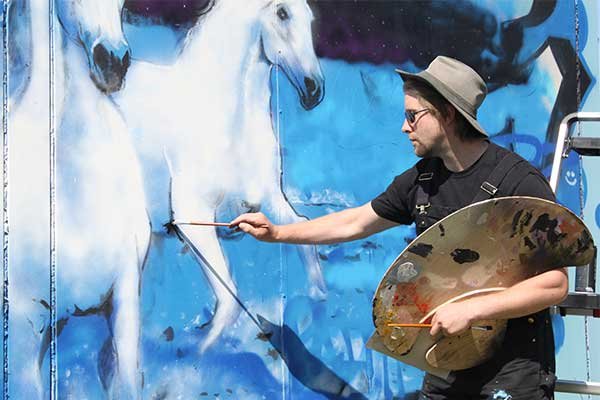 If you’ve never been to Whitehorse I heartily encourage you to spend some time wandering the streets of the downtown core.  Colin Alexander’s murals dot buildings large and small all over town and they truly are beautiful works of art.

It’s little things like a chance meeting and shared beauty… tiny slices of time where two people meet and share a positive moment together… that make life so amazing.  I find it hard not to be thankful for God’s graciousness at times like this; for giving me such a delightful treat as meeting the artist whose mural artwork I’d admired since arriving in this amazing Yukon city.

Whitehorse is a beautiful city where Colin Alexander’s street art is just one of many of the delights waiting here for you to discover.