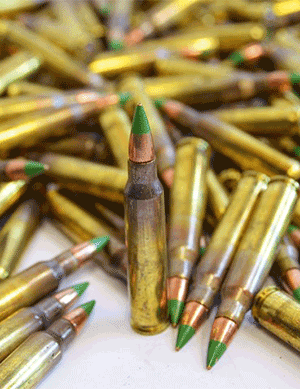 M855 ammunition is .223 calibre “green tip” ammunition most often used with AR-15 rifles. It is also used in some AR-15-style handguns: expensive and large handguns.

The Bureau of Alcohol, Tobacco and Firearms issued a proposal to ban this specific type of ammunition on February 13, 2015, claiming AR-15-type handguns are a “significant threat” to law enforcement officers.

That’s great, except not a single law enforcement officer killed in the last 38 years was shot by a handgun capable of firing the M855 cartridge. So says the FBI, which most would have to agree is a credible source on firearm deaths and what guns were used.

“All rifle ammo made with lead ammo is able to penetrate a soft body ‘vest’ because of the high velocity of rifle rounds, so banning M855 does not advance law officer safety. No police officer has ever been shot and killed with a so-called ‘armor piercing’ bullet fired from a handgun that penetrated a vest.”

“We are looking at additional ways to protect our brave men and women in law enforcement, and believe that this process is valuable for that reason alone. This seems to be an area where everyone should agree that if there are armor-piercing bullets available that can fit into easily concealed weapons, that it puts our law enforcement at considerably more risk.”

So while the White House backs the proposed BATF ban on M855 ammunition and the press screeches ever louder along with them, how come the Bureau of Alcohol, Tobacco and Firearms suddenly and without warning reversed course?

They are now no longer banning the most popular ammunition for the AR-15 rifle, citing any concerns about such a ban to a “publication error”.

They issued a press release about this “publication error” on their website, saying:

On Feb. 13, 2015, ATF released for public comment a proposed framework to guide its determination on what ammunition is “primarily intended for sporting purposes” for purposes of granting exemptions to the Gun Control Act’s prohibition on armor piecing ammunition.

The posted framework is only a proposal, posted for the purpose of receiving public comment, and no final determinations have been made.

Media reports have noted that the 2014 ATF Regulation Guide published online does not contain a listing of the exemptions for armor piercing ammunition, and conclude that the absence of this listing indicates these exemptions have been rescinded. This is not the case.

Please be advised that ATF has not rescinded any armor piercing ammunition exemption, and the fact they are not listed in the 2014 online edition of the regulations was an error which has no legal impact on the validity of the exemptions. The existing exemptions for armor piercing ammunition, which apply to 5.56 mm (.223) SS 109 and M855 projectiles (identified by a green coating on the projectile tip), and the U.S .30 – 06 M2AP projectile (identified by a black coating on the projectile tip), remain in effect.

The listing of Armor Piercing Ammunition exemptions can be found in the 2005 ATF Regulation Guide on page 166, which is posted here.

The 2014 Regulation Guide will be corrected in PDF format to include the listing of armor piercing ammunition exemptions and posted shortly.

The e-book/iBook version of the Regulation Guide will be corrected in the near future.

ATF apologizes for any confusion caused by this publishing error.

This looks far more like a trial balloon to see if they could get the ban through quickly and easily than it does a “publishing error”.

Vigilance rewarded, as it should be.