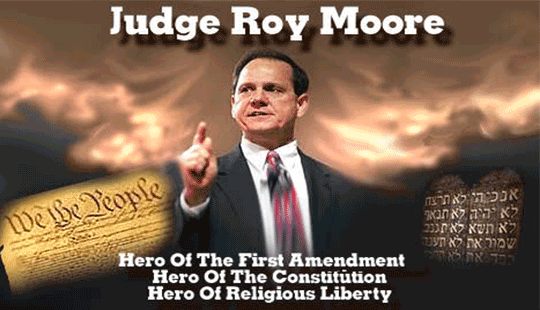 For years I’ve followed the career of Judge Roy Moore. He is the man who, as Chief Justice of the Alabama Supreme Court, defied the orders of a federal judge and kept the Ten Commandments in the Alabama Judicial Building. Judge Moore was ultimately removed from his post as Chief Justice as a result of his decision and his refusal to back down from it.

I admire a man with the courage of his convictions, who believes and acts on his beliefs, in this case that America is “one nation, under God”, no matter the cost.

Not one to take such a setback too seriously, in 2012 Roy Moore put his name in the ring for his former position of Chief Justice, which he won easily over Democratic candidate Bob Vance.

Judge Roy Moore is in hot water again, this time for maintaining his Christian belief in the Biblical and Alabama State definition of marriage, i.e. between one man and one woman.  He’s catching flak from the oddest of places for this position, too.

Who knew that supposedly Bible-believing Christians would oppose the Biblical definition of marriage!

Russell Moore (no relation to Judge Roy Moore), the head of the Southern Baptist Convention’s public policy arm, “says Alabama judges who in good conscience cannot issue marriage licenses to same-sex couples, should resign instead of fighting the law while in office.”

As a convention of churches, our missional vision is to present the Gospel of Jesus Christ to every person in the world and to make disciples of all the nations.

Russell Moore appears to be clueless about the Gospel of Jesus Christ and the Bible, which defines marriage quite clearly in Genesis 2:21-24:

21 So the LORD God caused the man to fall into a deep sleep; and while he was sleeping, he took one of the man’s ribs and closed up the place with flesh.

22 Then the LORD God made a woman from the rib he had taken out of the man, and he brought her to the man.

23 The man said, “This is now bone of my bones and flesh of my flesh; she shall be called ‘woman, ‘ for she was taken out of man.”

24 For this reason a man will leave his father and mother and be united to his wife, and they will become one flesh.

Alabama is a conservative state where over 80%of the population voted for a law denying marriage to same-sex couples. Clearly the majority of people in Alabama feel the same as Judge Roy Moore: marriage is between one man and one woman.

It’s a shame the folks at the Southern Baptist Convention comprehend neither Alabama state law nor the Bible itself.