You’d think judges would feel some semblance of shame eventually, but that just isn’t the case. When it comes to sentencing police officers convicted of criminal offences our judges fall all over themselves pandering to a misguided sense of justice.

Why is it wrong to send criminal cops to jail?

When it comes to sentencing a mere citizen convicted of the same criminal offenses as criminal cops our judges don’t hesitate. It’s off to the big house immediately.

Not so for criminal cops.

The latest in a long line of atrocities to justice is the sentencing of Toronto Police Services Constable Babak Andalib-Goortani for his conviction for assault causing bodily harm.

He will not spend a single day in prison. He will not lose his job. He will continue to carry a gun.

“Gee, we’re so sorry you got caught. Please don’t do it again.”

Then we send the convicted cop right back to work as if nothing ever happened. 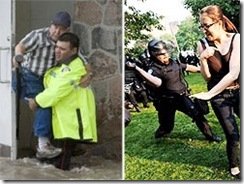 It’s not that Babak Andalib-Goortani was ALWAYS a thug cop. At one time he actually put his life on the line to save a complete stranger, the kind of behaviour we should expect of our police men and women.

That was Constable Andalib-Goortani in 2008.  A hero.  A man willing to put his own life on the line to save another human being. Just like any good cop would, and should.  That is, after all, the job they signed up for.

Clearly something did, and in a very big way because a man doesn’t go from life-saver to brutal thug without something happening to him.

Regardless of what happened to so drastically change an apparently good cop into just another thug, the fact remains that change did happen and he will not be held accountable for his actions.

Cops and judges demand we mere citizens be responsible for our actions, both good and bad, yet mysteriously they refuse to hold police to that same standard.

There is no “life lesson” to pass on to other cops to dissuade them from criminal behaviour. For criminal cops there is no penalty.

Our judges prove time and time again that there is nothing to fear from the “justice” system when cops break the law so guess what?

When we reward criminals, cops or not, with a slap on the wrist for atrocious behaviour is it really any mystery that they offend again?