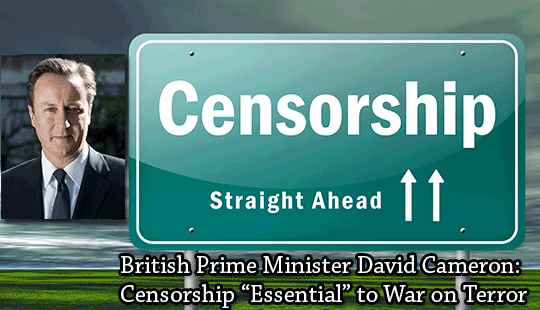 The United Nations despises Freedom of Speech because when a free people discusses the worthiness or lack thereof of that wannabe world government it is obvious that organization is found…. wanting.

Governments of all kinds despise the Internet and the Freedom of Speech it affords mere citizens the world over. They despise how easily an individual on one side of the planet can share ideas with another individual on the other about the issues they face.

Governments, both tyrannical dictatorships and alleged democracies alike, desperately need to silence their citizens on the internet. So far, the goal of stripping the citizens of the world of their Right to Freedom of Speech has failed, but never fear: Government will always find a bogeyman to blame for the “need” to strip us of our rights.

A trial balloon went up in Britain this past week as British Prime Minister David Cameron declared the “new and pressing challenge” facing that nation and the world is to strip the Internet of Free Speech.

Of course, David Cameron didn’t use that language. He used language far more likely to garner support from the masses who have lost their ability to think critically about the task at hand.

Prime Minister David Cameron used the newest and brightest bogeyman of them all, terrorism, as his rationale for stripping the world of free speech on the internet.

The “new and pressing challenge is getting extremist material taken down from the internet. We must not allow the internet to be an ungoverned space,” Cameron decried.

Cameron demanded British Internet Service Providers (ISPs) create filters for “harmful material” and the “extremist narrative” he deemed to be the instigator of terrorist activity the world over.

This is the “root cause” of terrorism so far as David Cameron is concerned and, in his view, radical Muslims will no longer chop off people’s heads on the streets of Britain or anywhere else once the Internet is appropriately sanitized.

He’s completely out to lunch, of course, but that did not stop him from ordering Britain’s ISPs to comply with his demands. Unfortunately for British citizens, those companies caved fully, completely and immediately.

The UK’s major Internet service providers – BT, Virgin, Sky and Talk Talk – have this week committed to host a public reporting button for terrorist material online, similar to the reporting button which allows the public to report child sexual exploitation.

They have also agreed to ensure that terrorist and extremist material is captured by their filters to prevent children and young people coming across radicalising material.

David Cameron wholeheartedly supports censorship… so long as he is the one who determines what gets censored, and therein lies the problem with censorship.

“We are making progress but there is further to go. This is their [ISPs] social responsibility. And we expect them to live up to it,” the prime minister added.

Cameron neatly sidesteps the actual root causes of terrorism, such as poverty and the foreign policy of Britain and other western nations, and places the blame on freedom of speech on the internet instead.

“And let us be frank. It’s not poverty, though of course our nations are united in tackling deprivation wherever it exists. It’s not exclusion from the mainstream. Of course we have more to do but we are both successful multicultural democracies where opportunities abound.

“And it’s not foreign policy. I can show you examples all over the world where British aid and British action have saved millions of Muslim lives, from Kosovo to Syria – but that is not exactly the real point. In our democracies, we must never give in to the idea that disagreeing with a foreign policy in any way justifies terrorist outrages.”

The root cause was in fact the “extremist narrative”, Cameron said.

Freedom of Speech is the cause of all the world’s ills. It’s that darned Free Speech on the internet that’s the culprit, don’t you know.

How long until Australian, American and Canadian governments order their Internet Service Providers to censor internet content to their liking? It is the wet dream of every president and prime minister on the planet; the ability to control what their people say, read and hear, and therefore what they think.

There remains only one question to be asked, really.

How long will it be until my protesting censorship is considered “extremist material” unsuited for the eyes of my fellow mere citizens?