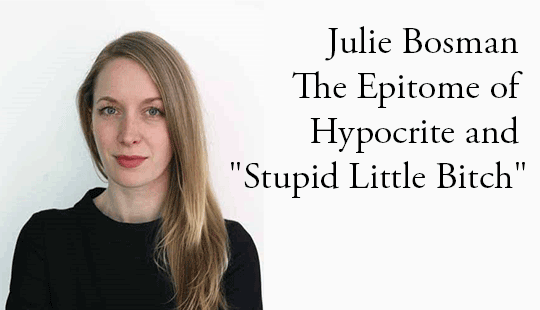 For those who don’t know, Julie Bosman is a journalist who works for the New York Times. That’s the title the New York Times gives her, anyway. I call her an irresponsible and hypocritical little bitch who felt it was her absolute right to violate the privacy of Ferguson Police Officer Darren Wilson.

Officer Darren Wilson hit the national stage when he shot and killed 18-year-old Michael Brown, the event that sparked riots at the time and again this past week when the Grand Jury refused to indict Wilson.

So-called journalist Julie Bosman clearly believes Wilson should be on trial for the shooting death of the young black man, despite not knowing all the facts. Monday morning quarterbacks can argue all day long but they, like Julie Bosman, argue from a position of ignorance.

The Grand Jury did hear all the facts and came to the conclusion Darren Wilson defended himself against criminal aggression. As a result of this conclusion, the Grand Jury correctly refused to indict him.

Will the fact Darren Wilson acted in self-defense ever sink in?

This apparently displeased Julie Bosman who, perched high atop her moral tower, found Darren Wilson’s his marriage licence with his home address on it (later determined to be his lawyer’s address) and knew immediately what she would do with the information.

She published Wilson’s address and the name of his fiancé in the New York Times newspaper. The marriage licence with the address information since been removed from the story, of course, thereby revising history in Bosman’s favour, but for better or worse, the internet is forever.

The comments on the story tell the tale vividly and are not so favourable:

Given the death threats against Darren Wilson, printing the street where he lives (not a long one) and his hometown is irresponsible. It’s also irrelevant to the story of his wedding.

Dangerous and utterly irresponsible to include the street where this couple resides. It is deeply disturbing that the reporter and/or editor at the NY Times did not exercise better judgment and realize that this was a serious problem.

Julie Bosman felt she was doing a good and moral thing, while in truth she violated Darren Wilson’s rights by invading his privacy.

Her motive for publishing Wilson’s home address will never be known for certainty, but it is no stretch to believe she did it hoping someone would “get him” for killing Michael Brown, despite the fact that shooting was in self-defense.

In what Mad World News calls “the most reckless and careless move in journalism this year” Julie Bosman published Wilson’s home address (see note above) and the name of his fiancé (now wife), practically guaranteeing their lives would be in jeopardy.

John Hawkins of Right Wing News issued a challenge to his Twitter followers:

It wasn’t long before the website GotNews did precisely that.

New York Times reporters Julie Bosman and Campbell Robertson published the address of Darren Wilson in the New York Times so here are their addresses. It would be wrong, for example, to publish Bosman’s address at…

So why do journalists think they are beyond examination?

This is a case of “You reap what you sow.”

Reportedly Julie Bosman is calling the Chicago police non-stop because she feels “threatened“.

Huh. You’ll have to excuse me for not feeling sorry for her. And as for her “feeling threatened“… perhaps Bosman should have considered how Officer Darren Wilson and his new wife would feel before publishing their address for the world to see.

Maybe then she wouldn’t be terrified in her own home.

While it is a brutal lesson to learn, I’m sure both Julie Bosman and Campbell Robertson learned it well, their own personal fear imprinting the lesson indelibly on their souls.

Mad World News said it best when they wrote:

As Hawkins points out, if they’re willing to endanger the lives of Wilson and his recent bride, then why wouldn’t they be okay with their own addresses being posted for the public to see? Nobody is beyond reproach, and these two scumbags just got a little taste of how it feels to have your personal life invaded over something that happened in their professional life.