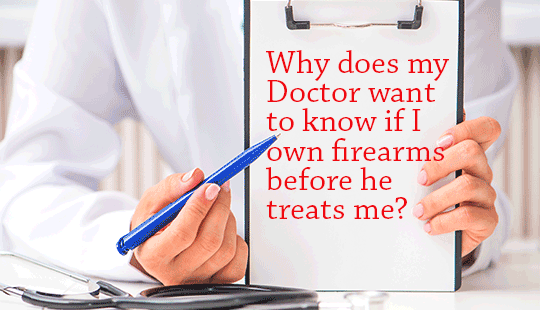 Why do American family physicians want to know if their patients own Firearms before treating them for [insert medical issue here]?

The only doctor who will ask you about gun ownership before treating you is a doctor who hates guns. Any doctor who hunts or target shoots or believes in your Right to Self-Defense isn’t going to ask the question. He won’t care. It’s only anti-gun doctors who believe you must abdicate your Second Amendment Right to Keep and Bear Arms before he or she will treat you.

There is a single reason for medical practitioners demanding to know if you own firearms before treating you. It’s got nothing to do with medicine and everything to do with politics. Their politics, not yours.

It’s obscene, but that’s the reality. The problem is so bad that two states, Florida and Missouri, have passed a law against the practice, effectively a gag order against doctors prying into that particular area of a patient’s life.

The practice comes out of the Center for Disease Control’s decision that guns are a disease and they must treat ownership of them as a disease.

President Obama, in his gun violence a “public health crisis” rhetoric, announced in 2013 he would fund the Center for Disease Control to “study the issue”, or in layman’s terms, look at ways of stripping people of guns based on a medical model. He also rescinded the 1995 prohibition on using federal tax dollars to advocate and/or promote “gun control”.

“While year after year, those who oppose even modest gun-safety measures have threatened to defund scientific or medical research into the causes of gun violence, I will direct the Centers for Disease Control (CDC) to go ahead and study the best ways to reduce it.”

“I agree that the CDC should be free to fund high-quality research into the causes and solutions to gun violence, one of the leading causes of premature mortality in the U.S. that affects not only deaths and injuries, but mental health as well.”

The CDC ought to stick to matters of medicine and stay out of social policy. As Emily Miller of the Washington Times noted in her January 2013 column, “Tax Dollars for Gun Control”,

Under the Bush administration, the CDC already conducted a two-year independent study of the laws, including bans on specified firearms or ammunition; gun registration; concealed-weapon carry; and zero-tolerance for firearms in schools. The scientists concluded in 2003 that there was “insufficient evidence to determine the effectiveness of any of the firearms laws reviewed for preventing violence.”

The notion that suicidal people denied access to firearms will not kill themselves, statistics on both sides of the border show that to be false.

Then in 1992, writing in another New England Journal of Medicine piece, Kellermann cited an American Journal of Psychiatry study to back up a claim that “limiting access to firearms could prevent many suicides.” Instead, that study really concluded that suicidal people who don’t have guns find other ways to kill themselves.

To put an end to the practice of harassing patients about gun ownership, Florida passed the “Florida Firearm Owners Privacy Act (FOPA)” which prohibits doctors from asking their patients if they own or possess firearms.

Anti-gun doctors and their associations, like the American Medical Association (AMA) and the American Academy of Pediatrics (AAP) to name but two, were up in arms over the legislation, claiming it violated their First Amendment rights.

Doctors claimed that FOPA “will denigrate the practice of medicine” by preventing physicians from “communicating freely with their patients on issues relating to the ownership and possession of firearms.”

The American Civil Liberties Union (ACLU), known for the passionate love of firearms (not!), predictably wrote in their brief to the court,

“there is no disagreement within the medical community that providing patients with information about firearm safety is a valid aspect of preventative care and thus beneficial to public health.”

Utter crap, of course, but that is irrelevant. The ACLU, AMA and AAP believe civilians should be disarmed, and will say pretty much anything to make that a reality.

The essence of the Act is simple: medical practitioners should not record information or inquire about patients’ firearm-ownership status when doing so is not necessary to providing the patient with good medical care. The Act’s harassment and discrimination provisions serve to reinforce these prohibitions.

As suggested by the complaints the Florida legislature received prior to passage of the Act, patients are aware that their answers to physicians’ inquiries will be entered into their medical record, and may fear that their record will be shared with third parties, including, for example, government bureaucrats.

We need not speculate as to the reasons a patient may have for objecting to the sharing of his or her firearm-ownership status, but we note that a patient might be concerned about disclosing to a physician information regarding any number of private topics when such information is not relevant to his or her medical care for similar reasons. For example, a patient may not wish to disclose his or her religious or political affiliations, sexual preferences, or bank account balance to a physician.

The Act merely circumscribes the unnecessary collection of patient information on one of many potential sensitive topics. It does so as a means of protecting a patient’s ability to receive effective medical treatment without compromising the patient’s privacy with regard to matters unrelated to healthcare.

Nothing in Florida law prevents or prohibits doctors from expressing their views on firearms or firearm ownership. Their First Amendment Rights are not infringed, but their ability to violate the Privacy Rights of their patients most certainly is.

As the National Rifle Association stated in their brief to the court in Wollschlaeger v. Governor of Florida,

“The Firearm Owners’ Privacy Act is another reasonable regulation of the medical practice. It exhorts doctors to stick to practicing medicine when examining patients, rather than pushing their own political agendas, and it protects patients from doctors who refuse to do so.”

Firearm ownership is not a disease, contrary to the irrational believes of some in the Center for Disease Control, the American Medical Association, the American Academy of Pediatrics.

These groups should stick to medicine and stay out of politics.

The American Civil Liberties Union out to protect our rights, not violate them whenever it suits their political agenda.