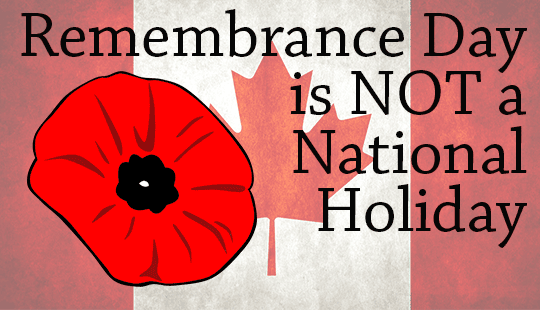 Provinces are not required to treat November 11 as a paid statutory holiday, and I was shocked to learn it was not a holiday in Manitoba, Ontario, Quebec and Nova Scotia. Even in those provinces, however, federal government workers still get the day off.

Here in British Columbia November 11 has always been a holiday so it never dawned on me that other provinces would not value the sacrifice of our veterans the same as we do.

Dan Harris introduced his private member Bill C-597, An Act to Amend the Holidays Act (Remembrance Day) to establish a resolve this problem.

“Our veterans risked and lost their lives in service to our country. It’s important to honour them for protecting and fighting for the freedoms we value today. When families attend ceremonies together, they are able to teach their children about the sacrifices and bravery demonstrated by our veterans and military. Having November 11th made into a statutory holiday will allow every Canadian an opportunity to attend their local Remembrance Day ceremonies and participate in this important day.”

His private members bill has wide support from all parties but that support is not, as the mainstream media insists, “almost unanimous“, unless you count the 42 MPs who refused to vote on the bill as “support.”

Not everyone wants Remembrance Day turned into a national holiday, however. “Jason” wrote the following on StatutoryHolidays.com.

“Please DO NOT make Remembrance Day a statutory holiday in Ontario. Family Day is a much more appreciated break for families in the heart of the long cold depressing winter. Remembrance Day is better observered in a ceremony at your school, community centre or place of work.”

Jason’s lack of spelling skills are matched only by lack of respect for the veterans who gave their lives so he could spout such drivel. I’m sure “Jason” would be shocked to learn over 100,000 Canadians gave their lives in just the two World Wars alone, not that it would matter to him, of course.

If you thought nothing could be more appalling than that, look at the list (below) of who refused to vote on Private Member Bill C-597, An Act to Amend the Holidays Act (Remembrance Day).

The only two “No” votes were recorded by conservative MPs Gary Schellenberger and David Tilson, but it was the list of MPs without the courage to vote at all was most shocking.

While I would fully expect nitwits like Adam Vaughan to live up to their spineless reputation by abstaining from such a vote, I am horrified that our current Minister of Veterans Affairs, Julian Fantino, refused to vote.

I cannot fathom why the Minister of Veterans Affairs would show such disdain for the very men and women for whom he is supposedly responsible. Clearly he does not believe the words he so proudly publishes on the Veterans Affairs Canada website:

“We owe a tremendous debt to those who have served the interests of our country, in preserving our freedoms, ensuring our prosperity and securing our future. They warrant our support and assistance and we are committed to delivering for them.”

The Honourable Julian Fantino is anything but honourable as far as his vote on Bill C-597 is concerned. Apparently the “tremendous debt” we owe does not include honouring them one day a year.

Some Conservative MPs, such as Veterans Affairs Minister Julian Fantino, have said they did not believe Nov. 11 needed to be a formal holiday to mark its importance and have Canadians pay their respects, as long as the day remained dignified.

That our Prime Minister would abstain from this vote shows a shocking lack of leadership and an equally shocking lack of respect for our veterans. It’s not a financial issue, since all federal government employees already get the day off with pay.

Conservative MP David Tilson had the courage of his convictions to vote “No” on the bill, even though he is thoroughly misguided on the issue.

Having previously served as a school trustee at a time when schools would close for Remembrance Day, Tilson said, “I found that students just went home.”

His claim that making Remembrance Day a national holiday would somehow lessen its significance is ridiculous in the extreme. By that bizarre rationale we ought to remove Canada Day from the list of national holidays too. After all, we wouldn’t want to “lessen the significance” of the nation’s birth, right?

Here is the full list of MPs who did not vote on Bill C-597, An Act to Amend the Holidays Act (Remembrance Day) by NDP MP Dan Harris. If one of these people is your Member of Parliament, please contact them and express your concern about their lack of respect for our veterans.