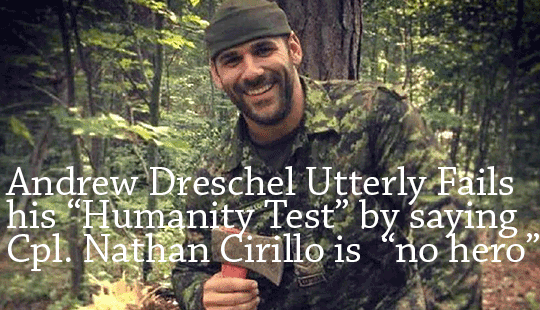 Canada watched in horror as the man standing guard at the Tomb of the Unknown Soldier lay dead on the ground, gunned down in cold blood by a radicalized Muslim nutcase.

One such insensitive douchebag is Hamilton Spectator writer Andrew Dreschel.

On October 31, 2014 Dreschel published an article titled “Cpl. Nathan Cirillo an Accidental Hero”. In that article Dreschel writes that Corporal Cirillo is not a hero, just an unlucky man gunned down by “a homeless crack addict with terrorist notions”.  Cirillo’s death is no big deal, Drescehl opines, since Nathan Cirillo was merely “at the wrong place at the wrong time.”

Where is my barf bucket?

It is appalling that mere days before Canadians honour our military veterans and our fallen dead for the sacrifice they made to protect our precious Rights and Freedoms that a writer and a newspaper could be so ignorant of who protects and defends those rights.

Nathan Cirillo (and Patrice Vincent just days before him) died in the service to our nation. They died specifically and only because they chose to defend Canadians’ precious Rights and Freedoms.

I fail to grasp how performing the sacred duty of honour guard at the Tomb of the Unknown Soldier is ever the “wrong place” to be, but then I actually comprehend what a sacred duty that task is, unlike the ignorant Hamilton Spectator editorial writer.

It is soldiers in uniforms, carrying guns into battle and giving their lives, who ensure others may live free and unencumbered by tyrants, not keyboard cowboys hiding behind computer screens.

While the argument can easily be made we aren’t as free as we ought and our tyrants simply more sophisticated than Hitler or Pol Pot, the fact remains that brave men and women in uniform are our last line of defense against tyranny.

That last line of defense comes at a price; a very steep price for those who die as well as for those who live. Those who gave their lives so the likes of Andrew Dreschel can spew his drivel get off easy. They don’t have to live with his mindless and insensitive words; only the living must suffer that indignity just days before we as a nation honour our veterans.

Freedom is NOT free.

Freedom of Speech and Freedom of the Press come with a price. Clearly that price is one Andrew Dreschel and the editorial staff at the Hamilton Spectator, including Editor-in-Chief Paul Berton, cannot fathom.

Claiming that Nathan Cirillo died “unprepared and unarmed” and therefore is not a hero is the stuff that fills vomit bags. It should be left out of mindless editorials.

Dreschel goes on to question military service in its entirety.

“Does that mean anyone who dies while in uniform is automatically a hero?”

The affirmative answer to that question is obvious to almost any human being with a pulse, but as I stated earlier, Andrew Dreschel failed his humanity test in spectacular fashion.

Yes, anyone who has the courage to put on a uniform and serve their nation is a hero, regardless of what function they perform. When a man is senselessly gunned down by “a homeless crack addict with terrorist notions” while guarding the Tomb of the Unknown Soldier yes, Andrew Dreschel, that man is a hero.

Guarding the Tomb of the Unknown Soldier is a sacred duty. It is an honour few Canadians can claim. Paying tribute to the men and women who gave their lives so douchebags like Andrew Dreschel and Editor-in-Chief Paul Berton can denigrate them with his drivel is what our Military men and women do.

Dreschel reveals his own shallow nature when he claims the rest of the nation only gives a damn because Cirillo was photogenic.

“Would the emotional outpouring have been as strong if Cirillo hadn’t been so photogenic? We don’t know, of course. But there’s little doubt his physical attractiveness gave poignancy to the tragedy, as did the fact he was a young single father.”

Throughout our history Canadian soldiers traveled to foreign lands to ensure the battle for freedom would never be fought on Canadian soil. Our military history is replete with examples of Canadians doing what others could not. Our military was both feared by the enemy and admired by allies for their bravery in such places as Vimy Ridge, Dieppe, and Juno Beach, to name but a few.

Corporal Branden Stevenson, both friend and fellow army reservist of Nathan Cirillo, released a poignant statement on the day he resumed his duty standing guard at the Tomb of the Unknown Soldier where his friend died.

“In the coming days, I’ll be resuming my duties at the National War Memorial. It will not be an easy task, but I am resolved to do it in honour of Nathan, Warrant Officer Patrice Vincent, and all those who stood, and continue to stand, on guard for Canada.”

Yes, even for mindless and insensitive jerks like Andrew Dreschel, Editor-in-Chief Paul Berton and the entire editorial staff at the Hamilton Spectator, who owe their very Right to Freedom of Speech to the men like the one they denigrate so easily, Corporal Nathan Cirillo.

“It is not for glory, nor riches, nor honours that we are fighting, but for freedom — for that alone, which no honest man gives up but with life itself.”
— The Declaration of Arbroath 1320.