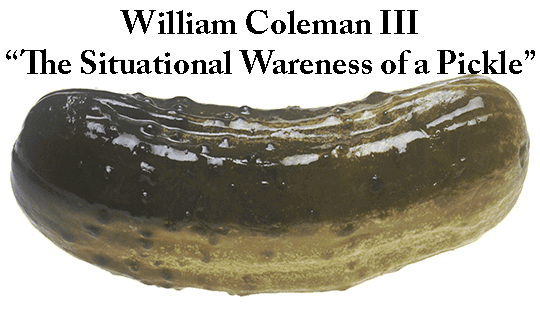 It would be hilarious if it wasn’t so predictable.

William Coleman III buys a gun but has no idea how to use it. He has no concept of situational awareness and believes, wrongly, that because he carries a gun he will be safe.

He straps on his new handgun and carries it publicly, all perfectly legal in Oregon, and then finds himself at the mercy of an actual criminal.

That criminal puts his own gun in the face of the new gun owner and asks a simple question.

Wanna give me your gun or you wanna die?

With the muzzle of a handgun pointed in his face the man with his open-carry handgun does the only sane thing… he lets the criminal steal his brand new toy.

If you’re going to carry a gun, know how to use it AND be aware of your surroundings.

According to Gresham police, William Coleman III was talking to his cousin near 172nd and Glisan at about 2:10 a.m. on Saturday while openly carrying the gun he had purchased on Friday.

Coleman said a man, about 19- to 23-years-old, approached them, asking for a cigarette. Coleman said the man then inquired about Coleman’s weapon, then pulled a pistol from his own waistband and said, “I like your gun. Give it to me.” Coleman handed over his new handgun and the suspect left on foot.

Coleman described the man as 6-foot-1, clean cut with a small patch of facial hair on his chin and short black wavy hair. He was wearing grey sweatpants, a white t-shirt and flip-flops during the incident.

One commenter on this story described this case perfectly.

Luckily, one idiot is now without his sidearm. Sadly, another idiot now has two.

Open carry announces to the world that you are armed. That makes you a primary target in almost any conceivable situation, especially if you have the situational awareness of a pickle.

Presumably, the suspect was last seen laughing his butt off at a friend’s crib, as he told them about the look on Mr. Coleman’s face as Coleman handed over his new gun.

I’d suggest that before Mr. Coleman even thinks about purchasing another firearm that he find a reputable shooting school in the Gresham area. He needs to learn not only know how to shoot, but how to carry a firearm concealed, how to select a decent firearm and holster for self-defense, and most importantly, how to stay out of dangerous situations. He set himself up for failure spectacularly, and the results are hardly surprising.

Buying a gun no more means that you know how to use it than buying a car means you know how to drive. Self-defense knowledge is the real weapon in your arsenal. A firearm is merely a tool that allows you to apply that knowledge in worst-case scenarios.

Then of course there are the stupid people, like commenter Mike Lowry, who said:

Wow, what a surprise, a snarky comment. Would you have preferred that the guy shoot the robber? I personally think he made the right decision by handing it over and leaving no dead bodies unnecessarily. Guns should only be fired in order to save lives, not to stop property theft.

Mike Lowry is willing to bet his life that a criminal willing to pull a gun and steal from him won’t be willing to kill him too.

Me? I’m unwilling to trust my life to the good intentions of a bad man, whether he just wants my property or not.