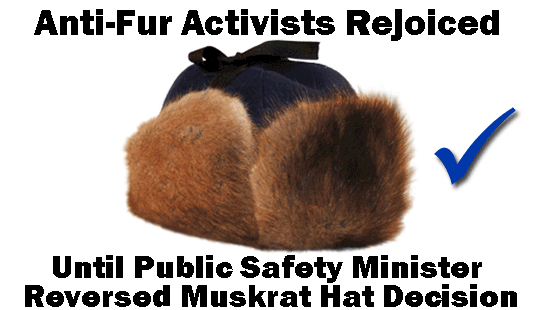 The news that the RCMP would abandon muskrat hats due to pressure from anti-fur activists was a little strange.

“We have listened to the views of external interested parties and of our employees,” wrote RCMP Corps Sergeant-Major Darren Campbell.

“RCMP officers stationed in areas that are not considered extreme will be issued the winter tuque only. Those that will require the fur hat will have to request approval and authority from their line officers in order to obtain the fur hat.”

What the RCMP didn’t count on was a government that has no interest in pandering to anti-fur activists, no matter how well-intentioned.

Environment Minister Leona Aglukkaq made it clear the historic fur hats were not going away any time soon.

The historic fur hats worn by the RCMP “will not be discontinued, despite the efforts of the radical animal-rights activists,” said Ms. Aglukkaq, a staunch supporter of the fur industry who hails from Nunavut.

“I would like to assure Canadians that the minister of public safety has taken actions to ensure that the historic fur winter hats worn by the RCMP will not be discontinued, despite the efforts of radical animal rights activists,” Environment Minister Leona Aglukkaq said during question period Tuesday.

“The RCMP decision, which is causing much glee among anti-fur activists, is being fully overturned. Our government will always stand up for Canada’s hunters and trappers.”

The Fur Institute of Canada issued a press release saying it was pleased with the government’s decision.

“The FIC is pleased that the Government’s support for this heritage as well as the internationally recognized principles of conservation will not be compromised by radical animal rights activists whose efforts and campaigns of misinformation only serve to hurt the livelihoods of Canadians in rural and remote communities.”

“Canadian trappers not only contribute to the economy, they also play an integral role in managing wildlife populations under the supervision of the government for the benefit of all Canadians. They are hard-working, dedicated conservationists who have a profound respect for animals and a love for nature. Today’s fur trade is highly regulated and utilizes traps, including those for muskrat, that are in full compliance with the Agreement on International Humane Trapping Standards.”

Better ten thousand families go hungry than a single animal fur be sold is their attitude.

Me? I’ll take my lead from someone better than me.

God gave Man dominion over the land and everything in it.  He put people first and I will happily follow His example.

Genesis 1:26  Then God said, “Let Us make man in Our image, according to Our likeness; let them have dominion over the fish of the sea, over the birds of the air, and over the cattle, over all the earth and over every creeping thing that creeps on the earth.”