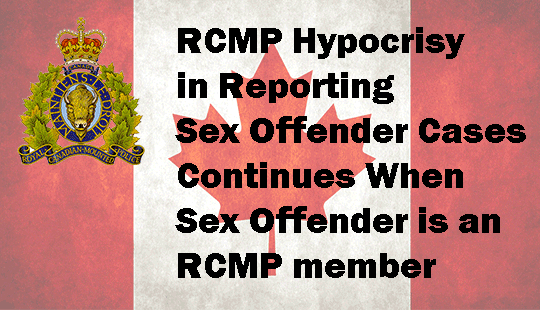 The RCMP has a long history of hypocrisy when it comes to dealing with sex offenders wearing Red Serge. If the sex offender is an RCMP member his name will NOT be released to the press and every possible measure is taken to protect his identity.

Such is the case once more, this time in Manitoba, as a 26-year RCMP veteran faces charges of sexual assault and sexual interference. Both charges relate to the sexual assault of a 9-year-old child.

It is beyond repulsive that the RCMP continues to provide aid and comfort to pedophiles in their own ranks, yet don’t waste a moment to publicly identify sex offenders who are not RCMP members.

He is expected to take up residence in the area known as Winnipeg River.

NELSON has previous convictions for Possession and Distribution of Child Pornography; Committing Indecent Acts as well as other criminal offences. Although NELSON may have participated in some sex offender treatment, he is still considered at risk to re-offend.   All children and adult females are at risk.

Prior to that, on August 5, 2014, Manitoba RCMP issued the following identifying information about another man who sexually assaulted an 8-year-old girl.

In August of 2012, an eight-year-old girl from Winnipeg was assaulted in Norway House, MB.

Apetagon was remanded into custody awaiting a court appearance in Thompson, Manitoba today.

Noticeably absent from the Manitoba RCMP Newsroom website is any information about their very own child molester.

This blatant hypocrisy is simply intolerable. If it’s okay to identify alleged sex offenders when they are “mere citizens” then surely it is acceptable to identify child molesters who happen to also be RCMP members. Either that or in cases where the accused is NOT an RCMP member there is no need to “protect the ongoing investigation”.

Here is the only information I could find on this atrocious case:

On Sunday, a 55-year-old officer was charged with sexual assault and sexual interference. Brandon police confirm the accused is a 26-year veteran of the RCMP who was not on duty at the time of the alleged assaults.

He has been released from custody on appropriate, police-imposed conditions to appear in court in Ashern on Nov. 19.

Police say the suspect’s name will not be released to protect the ongoing investigation.

The RCMP cannot hide their sex offenders behind “due process” and “innocent until proven guilty” when they repeatedly and publicly refuse to do the same for non-RCMP members.