I suppose I shouldn’t be surprised.

Bureaucrats are, generally speaking, a cowardly bunch, but the response given to Joseph Hickey, Executive Director of the Ontario Civil Liberties Association (OCLA) about Arthur Topham’s Freedom of Speech case is truly pathetic even by that low standard.

While addressed specifically to her, it seems Ms. Anton is a little to busy to respond to a letter of inquiry from the head of a civil liberties group. She ordered some anonymous government minion to respond on her behalf instead.

The cowardly bureaucrat answering Mr. Hickey’s questions, or more accurately evading them, refused to put his or her name on the letter.

I suppose they were terrified someone like me might get a hold of their non-responsive letter and their name and mock them mercilessly for their evasions and non-answers.

They would be correct.

I would do that.

I would take great pleasure in it, to be precise. For the moment I must take what pleasure I can in mocking the nameless bureaucrat…

As I’ve written repeatedly in regards to Arthur Topham’s case, the Criminal Code of Canada makes it very clear that a prosecution under Canada’s “Hate Propaganda” laws, including Section 319, CANNOT happen unless the Attorney General of the province personally signs off on the case.

No proceeding for an offence under this section shall be instituted without the consent of the Attorney General.

It doesn’t get any clearer than that.

The unnamed bureaucratic minion starts the response off by completely ignoring Section 318 (3) of the Criminal Code, which is the primary subject of Joseph Hickley’s letter.

This is complete and utter hogwash.

While the Criminal Justice Branch may be responsible for “the conduct and supervision of criminal prosecutions” in most cases, that authority resides specifically and ONLY with the BC’s Attorney General in the Arthur Topham criminal prosecution under Section 319(2).

Quoting the OCLA’s most recent letter:

Criminal Code (at s. 2) expressly defines “Attorney General” as meaning “the Attorney General or Solicitor General of the province in which those proceedings are taken and includes his or her lawful deputy”.

The proceedings against Mr. Topham (R v Topham) are taken in BC.

Thus, to use the colloquial expression, the buck stops at your office, Madame Attorney General.

After claiming Attorney General Anton is not responsible for Topham’s prosecution the cowardly bureaucrat then drones on about presumption of innocence, something the Crown prosecutor in Arthur Topham’s case has repeatedly tried to quash.

From the day Arthur Topham was arrested until today, the Crown Prosecutor has tried to strip Arthur Topham of his Right to Freedom of Speech.  That would be “guilty until proven innocent“, the exact opposite of presumption of innocence.

Should Arthur Topham write those names publicly he is in contempt of court.

How absurd is that?

After further droning about how Attorney General Suzanne Anton isn’t actually responsible for the Topham case the unnamed bureaucrat then attempts to blame Peter MacKay, Canada’s Minister of Justice and Attorney General, despite the fact MacKay is not the person who must personally approve a criminal charge under Section 319; Suzanne Anton is.

If you can stomach it the cowardly unsigned response to Hickey’s original letter is available for download here at the link below. This PDF file also includes Joseph Hickey’s second letter clarifying Minister Anton’s responsibilities, including a repeated demand she rescind her approval of the prosecution of Arthur Topham. 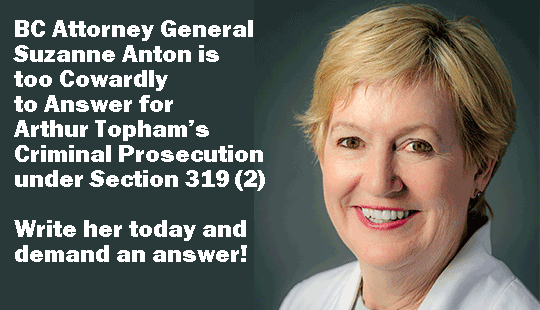 If you are a British Columbia resident I urge you to write Minister Anton and personally demand she rescind her consent for Arthur Topham’s criminal prosecution. As I’ve explained above she must personally approve charges under Section 319 of the Criminal Code before they can be prosecuted.

You can reach Ms. Anton here: