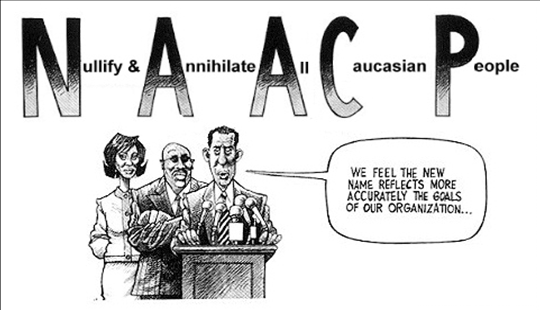 Racism is alive and well in America. It’s thriving, in fact.

Just ask Al Sharpton, Jesse Jackson, Eric Holder or Barack Obama. They will all confirm racism is at an all-time high, despite Obama’s election pledge that his America would be colorblind; that racism would be nothing but a footnote in history.

Obama’s America is anything but colorblind.

Facts be damned… white on black racism is at an all-time high, says Obama. White on Black violent crime is epidemic, even if you can’t find any news stories to back up the claim.

There is a reason you can’t find those news stories, of course. They don’t exist.

There is a reason they don’t exist, of course, but it’s not that the media refuses to report them. It’s because the epidemic of white on black racism is a lie presented over and over again by the four Black race hustlers I mentioned earlier, Al Sharpton, Jesse Jackson, Eric Holder and Barack Obama.

If you tell a lie often enough (and with enough media coverage) it becomes the truth, even in the face of overwhelming statistical evidence to the contrary from the Obama administration’s own FBI statistics.

As Bill Whittle explains with simplicity in his video “Ferguson and the Real Race War”, using FBI statistics there were 406,217 robberies in 2009. That is, on average, one robbery every minute, 24-hours a day for an entire year, or roughly 1,000 times per day.

Given that level of crime and making the asinine assumption that every single robbery in America in 2009 was committed by a black perpetrator, if there is an epidemic of white cops executing black criminals you would think we’d hear about it, right?

We hear about the killing of a young black man by a white cop so rarely because, (gasp!) it happens so rarely. We only hear about it then because the race hustlers Al Sharpton, Jesse Jackson, Eric Holder and Barack Obama are desperate to peddle their lies and thereby increase donations to their cause.

“If this is an epidemic, where’s the epidemic?” Bill Whittle rightly asks.

According to the National Crime Victimization Survey in 2010 white perpetrators committed violence on black victims 82,593 times. During that same year black perpetrators committed violence on white victims 320,082 times, or 5 times as many. When you take into account the size difference of the black and white communities you learn something very disturbing (if you’re interested in the truth): 38 million black Americans commit violent crimes on 197 million white Americans.

What these numbers mean is that black perpetrators attack white victims 25 times more often than the other way around.

Looking at a single type of violent crime, aggravated assault, the number of black on white assaults is 200 times higher than white on black assaults.

But you’ll never hear those numbers on the mainstream media. It doesn’t fit the President’s agenda, therefore it cannot be spoken out loud.

Yes, there is an epidemic of racial violence in America, but it’s not what the race hustlers Al Sharpton, Jesse Jackson, Eric Holder and Barack Obama want you to believe.

It’s precisely the opposite.

If you were a President interested in the truth you would do everything you could to stop this racial violence. But Obama isn’t interested in stopping it at all. In fact both he and Eric Holder continue to peddle their lie at every opportunity.

Obama should go back to the golf course and take Eric Holder with him. He does a lot less damage to America when he’s only paying attention to his golf swing.