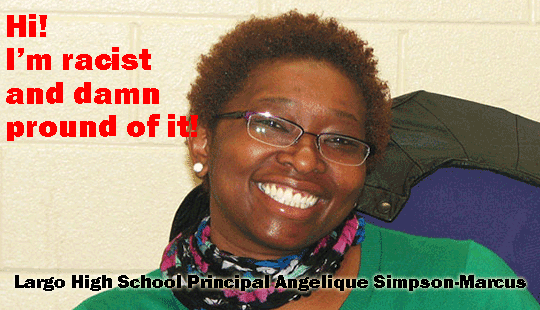 Largo High School Principal Angelique Simpson-Marcus is a racist.  She doesn’t fit the Obama mold, of course, since she’s black and her racism targeted a white teacher.  It’s precisely the opposite of the “racial epidemic” that Obama spews about.

Jon Everhart was a good teacher. A good white teacher.  He taught honours English to both juniors and seniors. He consistently received excellent evaluations and was named Teacher of the Year.

Then along came Angelique Simpson-Marcus.

She told Everhart if she ever became principal he would be the first teacher she fired.

Because he was white.

Jon Everhart filed a union grievance against Angelique Simpson-Marcus for her racist remarks, but because he is white and she is black nothing was done about it.  Or at least that’s how it looks from the outside.

Had their colors been reversed the case would be a slam-dunk, but in Obama’s America we simply cannot admit there is Black Racism against Whites.

She immediately pulled him from teaching honors English.  She told others Everhart was “poor white trash” and, according to Everhart, said this to students:

“[The] only reason a white teacher teaches in [Prince George’s] County is that they can’t get a job elsewhere.”

She continued her racial persecution of Jon Everhart by downgrading his evaluations from excellent to poor.  She denied his transfer request to another school.  In fact she was not satisfied until her continuous actions against the white teacher resulted in his being fired and his teaching certificate revoked.

Jon Everhart immediately filed a $5 million lawsuit against Simpson-Marcus and the school board for racial discrimination and, astoundingly in Obama’s America, he won.

What is baffling, however, is that despite awarding Everhart $350,000 for compensatory damages the jury in this case refused to say Everhart was forced to teach in a hostile work environment.

If your boss tells the world she will fire you “because you’re white” and consistently backs up that statement with actions damaging to your career that is a hostile work environment.  I don’t care what color you are.

But… this is Obama’s America and being a white man oppressed by a black woman only gets you so far.

Had the roles been reversed and it was a white man firing a black woman in these same circumstances the result would be very different.  Five million dollars is probably the tip of the iceberg of cash that defendant would receive.

But this is Obama’s America… and whites don’t suffer racism from blacks, right?