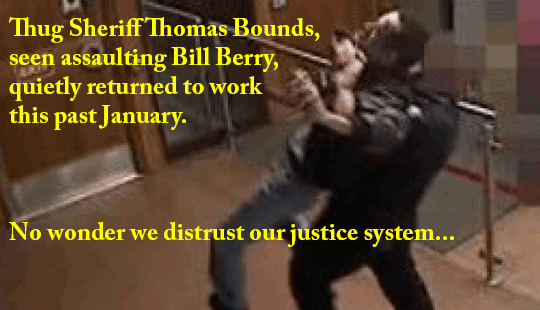 William (Bill) Berry is a two-time cancer survivor who is also deaf and mute. He breathes through a tube in his throat. By any scale imaginable he is a frail man but that didn’t stop Alberta Sheriff Thomas Bounds from attacking Bill Berry in the Red Deer courthouse two years ago.

No, the thug with a badge and a bucket-full of attitude to go with it felt justified grabbing the frail deaf-mute and tossing him to the ground because Berry was “aggressively waving his arms” at him when Bounds approached him.

What Sheriff Bounds called “aggressively waving his arms” was Bill Berry using sign language to ask what the heck the problem was.

Sheriff Bounds couldn’t figure that out or more likely, didn’t want to figure it out, preferring to submit the heinous offender by any means necessary.

Berry’s breathing tube, dislodged by Thomas Bounds’ attack, was eventually replaced by another sheriff, but not before Bill Berry was unable to breath for almost a minute.

As I said when I first wrote about Sherriff Thomas Bounds’ excessive use of force:

It is simply not rational to conclude that Mr. Bill Berry is a physical threat to anyone. Look at that photograph! The man isn’t a threat to a glass of water, for crying out loud!

If I sound offended, it’s only because I am.

I am sick to death of thugs of the state, armed with badges and guns, who think they can do anything they want to anyone they want, without consequence.

There are literally dozens and dozens of articles about state-trained thugs on this blog that cite case after case of this sort of garbage. RCMP Constable Geoff Mantler and RCMP Corporal Monty Robinson are just two of the dozens of examples I could quote.

In 2012 Alberta’s Justice Minister Jonathan Denis told reporters that Thomas Bounds was “no longer employed” by the provincial government.

My column went on to say this:

Unless and until actions as disgusting as Sheriff Bounds’ are treated seriously, ideally with the immediate termination of the offender, they will continue.

Only the immediate termination of Sheriff Thomas Bounds (and the next ten government-paid thugs that pull this sort of crap) will get the message out to the rest of the troops that this type of behaviour will no longer be tolerated.

Until that day, police across the country will continue to treat citizens any way they want, not with the respect and dignity we deserve.

Is it really any mystery why the trust gap between citizens and police only continues to widen?

No, it really isn’t. Especially when government officials figure a suitable period of silence has passed and they re-instate these offenders to their previous posts.

Unbelievably Thomas Bounds was quietly returned to work at the Red Deer courthouse this past January.

For reasons I cannot comprehend, the Alberta government caved in to the Alberta Union of Provincial Employees and reached a “settlement” allowing Bounds to return to work.

“(I’m) outraged,” William Berry explained. “The law should be a shield for the weak and helpless. Not a club for the powerful.“

I don’t care what rationalizations Thomas Bounds has for his heinous behaviour. We cannot allow thugs in our public service. They disgrace themselves, their fellow public servants and the entire justice system.

That decision is appalling, but serves to ensure we mere citizens cannot trust our government or its law enforcers.

How can we when thugs like Thomas Bounds are returned to work instead of being prosecuted like any mere citizen would be in the same circumstance?

If using excessive force on a deaf-mute cancer survivor isn’t grounds for termination God only knows what is.