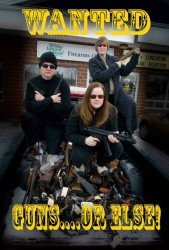 Prince Edward Island Chief Firearms Officer Vivian Hayward, (center with her finger on the trigger) is nothing if not a fear-mongering liar.

Unhappy with Public Safety Minister Steven Blaney’s announcement that provincial Chief Firearms Officers are about to have their wings severely clipped, Vivian Hayward decided the best defence was a fabricated fear-mongering offense.

Stripping down the bloated firearms bureaucracy by combining firearms licenses and Authorizations to Transport restricted firearms is logical and something rational Canadians have wanted for over a decade.

If an individual is deemed safe to own restricted firearms (handguns) there is no rational reason to think they cannot be trusted to take those firearms to and from shooting ranges, gunsmiths and border crossings responsibly.

It’s is simply the desire of Chief Firearms Officers like the lying Vivian Hayward to micro-manage every move of law-abiding Canadians that keeps this wasteful system in place.

Nothing in Minister Blaney’s announcement leads to open or concealed carry, but that didn’t stop Vivian Hayward from spouting the following gibberish to anyone who would listen.

“(It’s) just basically one step away from the U.S.-style having the gun on their hip authorization to carry, which people in this country don’t have.”

That is simply not true.

A spoken statement that is untrue is commonly called a lie.

The common name for a person telling lies is a liar.

That describes Vivian Hayward perfectly, especially in light of the following statement.

“You would never be able to convict somebody and say, ‘What are you doing at this shopping mall with a restricted firearm in your vehicle?’ It would no longer be an unauthorized place because they would no longer have an ATT. I see huge implications for the police.”

What makes this moron think the current requirement for firearms to be transported to and from ranges, gunsmiths and border crossings to be as direct a route as possible?

Even current regulations do not prevent a person from stopping for coffee when going to or from the range, or even (gasp!) stop at a shopping mall to buy hearing protection before going to the shooting range.

A spokesperson for Public Safety Canada said Friday all safe transport and storage requirements will continue to apply “…including that firearms must be transported to an authorized location such as a shooting club, and the firearms owner must take the most direct route,” said Jean Paul Duval of Public Safety Canada in an e-mail to The Guardian.

She takes great pride in manufacturing criminals out of we mere citizens and is distressed her ability to do that will be severely curtailed once the proposed legislation passes.

This lying wench ought to quit right now before she embarrasses herself and the RCMP even further. If she refuses to resign she should be fired for incompetence.

And yes, that is the Chief Firearms Officer’s finger on the trigger. Just like the rest of her staff.

This is who is in charge of enforcing firearm law in Prince Edward Island?

God help us all. 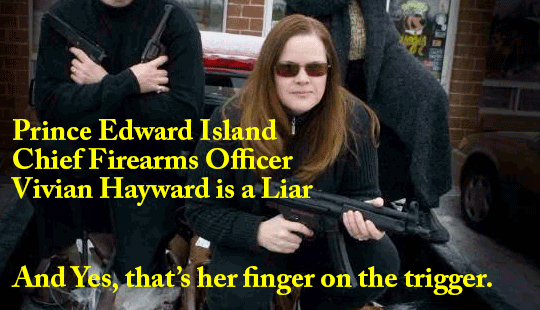