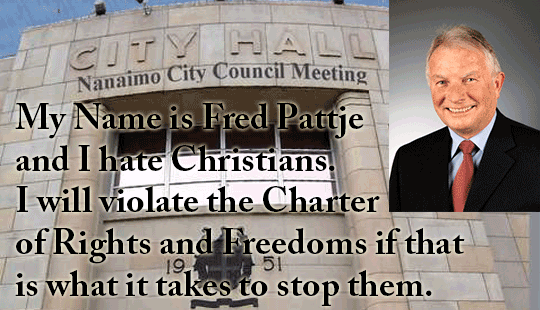 I could have sworn we mere citizens, through the Charter of Rights and Freedoms, enjoyed a quaint little notion called Freedom of Religion and that we could not be discriminated against because of our choice of religion.

It appears I was mistaken. Either that or the moronic bigots at Nanaimo City Hall violated the Charter Rights of Canadians they identified as “Christians.”

Councillor Fred Pattje, the bigot who introduced the motion to ban the Christian leadership event, said in his introduction to his motion,

“The Nanaimo Daily News had sponsored an event, a leadership event, a cast, a podcast, in this facility that among others was sponsored by a company in the United States called Chic Fil-A, the owner of which has a rich history of homophobia and other divisive practices. The gentleman’s name is Mr. Dan Cathy.”

Dan Cathy is a Christian businessman who views marriage as a union between one man and one woman. Mr. Cathy also views homosexuality as a sin, just as stealing, adultery and murder are sins.

“The company is renowned for major funding of what I would call a very strong unbelievable Christian belief, so for me this is really, real simple for us. We’ve said before to it, it’s not just… it’s not just the speakers coming here, it’s who’s funding it, what their messages are outside of this one realm where I… I can’t support it at all, the way they spread the stuff that they do.”

He went on to compare Dan Cathy and his family restaurant to criminals and terrorists.

“We won’t accept if a criminal organization wants to come into our community and, um, set up and have a podcast, so I just say this one…. I find this almost to be a criminal point of view in this day and age with the hatred that we’ve seen this past week in our own community? And the stuff that’s going on around the world… Little girls, 270 girls are missing? This is this is just nuts.”

That a man and his company can be vilified because of his religious beliefs is utterly offensive.

What shocks me is nobody has yet, to the best of my knowledge, filed a Human Rights Complaint against the Nanaimo City Council for both their vitriolic 20-minute anti-Christian tirade they call a City Council Meeting and the motion banning Christians from using the city-owned Convention Center.

Councillor George Anderson had the gall to say this:

“I think that goes to show that this council is showing leadership itself by saying we will not accept acts of hate and its even within our Charter of Rights and Freedoms that hate speech is not permitted and so for us to go ahead and say because it is just a leadership event that organizations that promote hate should be able to use our facility sends the wrong message. So I am happy top support the motion because its unfortunate to see this type of organization coming and using a publicly owned publicly funded facility so I’m happy to support the motion.”

Neither Dan Cathy or his company, Chic-fil-A, “promote hate”. They promote Christian family values. There is a difference, but one that the self-described progressive city council of Nanaimo can’t grasp.

Bill Bestwick, proudly donning the hat of Nanaimo’s Chief Censor, declared it would be more effective to black out the event, to simply turn off the equipment in the convention center, than to cancel it entirely.

“I don’t want… Personally I don’t want to hear what this has to say. So, the reason that I might have suggested, that if I knew (ahead of the motion being presented) because staff knew on Friday and I totally respect the motion and I’ll support the motion, but for me I would love to black them, if all of the other speakers, if there’s a dozen or ten and its three hours long or however long it is, then black that out. I think it’s… Personally I think would be, actually more effective… to… to… it’s a blackout. You can’t get this game in BC. You can’t get this person in Nanaimo. Because we don’t support it.”

Censorship is ALWAYS the answer when you can’t handle an opinion that is different than your own.

Censorship is the sign of an incredibly small and closed mind.

When you are so terrified of opinion, as the members of Nanaimo City Council are, that you refuse to let anyone else hear that opinion either you reveal to the world what you truly are: petty, puny and ignorant.

When asked if the sponsor of the LeaderCast event, the Nanaimo Daily News newspaper, was aware a motion to cancel the event was before city council, Fred Pattje responded with,

“They were not. I know that as late as an hour and a half ago city staff have had a conversation with senior staff at the Nanaimo Daily News and I don’t know whether at that point that person was advised or not but it’s kind of beside the point as far as I’m concerned.”

What more would you expect from politicians behaving like cockroaches?

Why hear all sides to a story when you can proclaim from on high all that is Right and Good in the world, then ridicule and defame anyone who disagrees with you.

Like with all cockroaches, however, when you shine the light of truth on them they scurry for cover.

First the city issued a formal statement (PDF) on June 26, 2014. Like councillor George Anderson, they attempted to use the Charter of Rights and Freedoms to justify their asinine and criminal act of discrimination.

The City of Nanaimo and its Council fully support and are committed to upholding the fundamental rights and freedoms of all Canadians under the Canadian Charter of Rights and Freedoms and the Human Rights Code.

The City of Nanaimo and its Council also recognize that the values underlying the Canadian Charter of Rights and Freedoms and the Human Rights Code apply equally to the protection against discrimination of Canadians of all races, national or ethnic origin, colour, age, mental or physical disability, religions, sex and sexual orientation.

And finally, the City of Nanaimo and its Council recognize that the fundamental rights and freedoms under the Canadian Charter of Rights and Freedoms and the Human Rights Code must sometimes be balanced between groups of Canadians having differing views and that the process of creating this balance is both challenging and complex.

Nanaimo’s Council accepts that, in passing the May 5 resolution, some Canadians support its actions while other Canadians do not. However, if presented with comparable circumstances again, Nanaimo’s current Council is confident that actions similar to those taken on May 5 would not be repeated.

The City of Nanaimo and its Council strongly believe that Canadians of all races, national or ethnic origin, colour, age, mental or physical disability, religions, sex and sexual orientation are entitled to use any facility that is either owned by or in the control of the City in the same manner, subject always to the rule of law.

Let me interpret for you.

“We didn’t do anything wrong but if faced with the same decision again we would not do it again.”

If you didn’t do anything wrong then have the courage of your convictions.

Don’t hide from what you did. Own it!

But they did do something wrong and each and every one of Nanaimo’s city council knew it. They could only defend the indefensible so much before they could no longer believe the drivel coming out of their own mouths.

Ezra Levant, after he was notified of the anti-Freedom act of Nanaimo City Council by the citizens of that city, got hold of this issue and went to town on it.

Whatever else you may think of Ezra Levant, the man is fearless when confronting petty thugs and censors like the Nanaimo City Council.

Then he flew to Nanaimo to confront them in person.

I must confess I smiled as I watched both Nanaimo mayor John Ruttan and Fred Pattje backpedal as though their lives depended on it. Their political lives may very well depend on their backpedalling ability, given civic elections only a few months away.

Cockroaches hate the light. They despise being seen for what they are. That was evident as both men fell over themselves apologizing for their atrocious actions.

What was most fascinating to watch was Councillor Fred Pattje’s shock and hurt that anyone would disagree with him.

It was a deeply humbled Fred Pattje who Ezra Levant interviewed this week, not the outraged man calling Fred Cathy and Chic-fil-A “awful” for the heinous crime of defending traditional marriage.

“The connection alone between Leadership.com, you can go on the website, and the connection between that and Chi-fil-A and their awful history of dealing with things gay and lesbian should be enough (to cancel the event). This is about an organization that is being sponsored by a man who has done tremendous damage.”

That thousands of mere citizens from across this great land wrote him and expressed their disgust genuinely appeared to hurt him. That anyone would call him a “Nazi”, especially his own nationality, clearly distressed him greatly.

What is appalling is that until that moment, until his own bigotry was tossed in his face, Fred Pattje could not comprehend he did offended and discriminated against Christians without a moment’s hesitation.

As a result of Ezra Levant’s online petition, legal fundraising and relentless national coverage of their flagrant violation of the Charter of Rights and Freedoms, Nanaimo City Council is about to repeal the motion banning Christian organizations from using the Nanaimo convention center.

The lesson of Nanaimo’s bigotry and Charter violations is simple.

Petty tyrants and bullies must be fought everywhere we find them.

In this case it was at the municipal level and, in the grand scheme of things, took very little to force them to do the right thing.

But they had to be forced.

They refused to do the right thing on their own, despite being given many opportunities to do so. It took mere citizens standing up for themselves and their precious Rights and Freedoms.

It took the Light of the World being shone upon them before they would step back and obey the Charter of Rights and Freedoms.

If you’re interested in seeing the entire fiasco unfold you can view the timeline of events at http://therealbigots.com/nanaimo-bigots.php