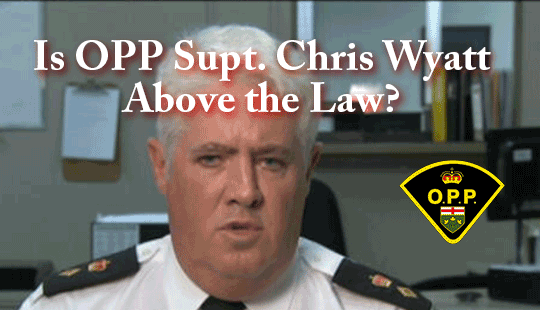 We all owe Canadian gun owner Daniel Balofsky a debt of gratitude.

He persisted all the way to the Ontario Court of Appeal so a court of law would decide whether or not the law must be abided by all; whether a court order applies only to the mere citizens of Canada or to its law-enforcement as well.

The answer from the Ontario Court of Appeals is as appalling as it is expected.

Court orders have no validity when applied to Ontario’s Chief Firearm Officer.

At issue is the fact Ontario Chief Firearms Officer Chris Wyatt, after refusing to issue Daniel Balofsky an Authorization to Transport his restricted firearms, was ordered by a judge to issue that document.

He refused to issue the required document and he refused to follow the direction of a judge through a court order.

If OPP Superintendent Chris Wyatt is above the law and is not required to obey court orders, who is?

Why, we mere citizens, that’s who.

You see, the very people who are above the law you and I must obey are also the ones enforcing that law… at the barrel of their state-issued guns.

This decision brings the fact police are not required to obey the law into stark focus.

It also brings into stark focus the fact our police forces are out of control; that they make up the rules as they go and they do not care this appalling lack of respect for our judicial system brings “the administration of justice into disrepute”.

Canada has one set of laws for police and another for its citizens.  The former has no duty to follow the law whatsoever while the latter must face the barrel of state-owned guns wielded by the very people who do not obey it.

To use the old American Express slogan…

Membership Has Its Privileges.

Watch Daniel Balofsky’s explanation of this absurd decision on YouTube: