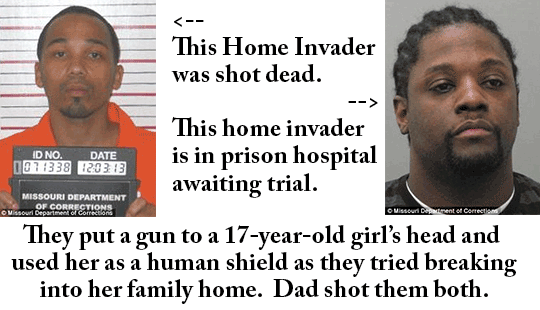 The story is terrifying.  A man, faced with two large black men invading his home, must choose how to deal with the thugs holding his daughter captive as a human shield.

The 17-year-old daughter is at her car grabbing stuff to bring into the house.  Two masked thugs grab her, put a gun to her head and, using her as a human shield, force their way inside the home.

The girl’s father watches this go down and grabs his own gun.

He fires at the masked home invaders, killing one and seriously wounding the other as they entered the front door.

His accomplice, Cortez McClinton, 33, received multiple gunshot wounds to his chest and thighs. He is expected to recover.

Cortez McClinton, charged with second-degree murder, kidnapping, burglary and armed criminal action, was released from jail this past January when prosecutors dropped the murder charge against him when nobody would testify against him.

Clearly a model citizen, I have no doubt Cortez McClinton would not harm a soul inside the home he just invaded using a 17-year-old as a hostage while holding a gun to her head.

It was all for show.

Or so his family and friends will no doubt assert as they whine about his being shot and his accomplice now lies on a slab in the morgue.

On the bright side the 17-year-old daughter was completely unharmed even though her attackers suffered fatal and serious injuries, respectively.

Nobody else in the family was harmed inside the home either.

Only the masked home-invading scumbags were killed or injured, exactly as they ought.

Given the record of Cortez McClinton it seems a shame he will survive his injuries, but given that record it is also highly unlikely he will learn from the error of his ways.

With previous convictions for drugs and vehicle tampering and a dropped murder charge due to lack of witnesses, McClinton (right) does not appear to be a candidate for rehabilitation.

He will also face felony murder charges for the death of his accomplice as his actions led directly to Terrell Johnson’s death.

Police say there are no charges against anyone inside the home as this is a clear-cut case of self-defense.

There are times when dialing 9-1-1 simply isn’t an option.  Everyone in that home would be dead long before police could ever arrive.

The only thing that kept them alive was a father who owns guns who possessed the willingness to use deadly force to save the lives of his his daughter and the rest of his family.

NOTE: His wife also shot at the intruders holding her daughter hostage. Now there are two parents I’d be proud to know!