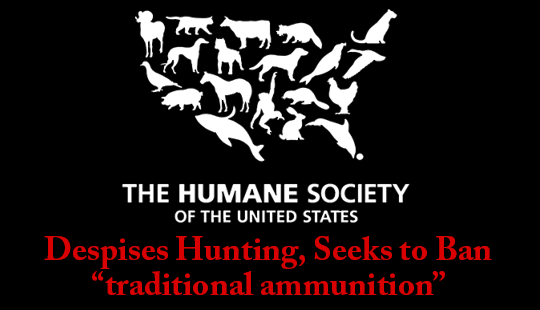 The Human Society of the United States (HSUS) and other anti-hunting groups filed a petition with the Interior Department demanding that hunting on public lands with “traditional ammunition” be banned.

That would strip over 1/5 of the total land area of the United States from hunters.

“We have intentionally chosen to concentrate first on banning the use of all lead ammunition for hunting in California and pursuing a ban on federal lands owned by the Department of Interior in order to build momentum for the campaign and to spur change within the various ammunition manufacturers and state wildlife agencies.”

What most Americans don’t understand is that while it has a catchy name, the Human Society of the United States has no interest in saving animals at your local animal shelter.

Oklahoma Attorney General Scott Pruitt issued a consumer warning after HSUS sought donations in the wake of last year’s Moore tornadoes. HSUS misled donors, giving them the impression their donations would go to local animal shelters when in fact they did not.

The Center for Consumer Freedom issued a press release stating:

“The Humane Society of the United States deceives donors with tear-jerking and manipulative images of dogs and cats, and then funnels the money to push a radical animal liberation agenda aimed at attacking farmers.“

Despite The Humane Society of the United States deceiving donors into believing they support animal welfare efforts with their contributions, only 1 percent of HSUS’ annual budget goes to local animal shelters.

Where does the other 99% go? To radical anti-hunting efforts, among other so-called “causes”.

It is no secret that Wayne Pacelle, the rabid anti-hunter who runs HSUS, despises hunting. He’s made public statements to that effect repeatedly in the past. Here are just two examples of his hatred for hunting and hunters.

“We are going to use the ballot box and the democratic process to stop all hunting in the United States. We will take it species by species until all hunting is stopped in California. Then we will take it state by state.” (Full Cry Magazine, 1 October 1990).

The current effort attacks “traditional ammunition”, even though there is no scientific proof that lead is a problem. Anyone looking at the data rationally (i.e. without a preconceived outcome) knows that lead shot, even in marshland, causes very little problems.

Lead is heavier than anything else in the marsh. It sinks into the mud and disappears. If that wasn’t true our wetlands would be vast expanses of lead shot. They are not.

Claiming that lead bullets used in hunting big game is in any way a risk to animal populations is simply ridiculous, yet that isn’t stopping Pacelle and HSUS from lobbying hard for banning what he labels “traditional ammunition”.

Hunters who believe Pacelle and his ilk will be satisfied if we simply use a different type of ammunition aren’t paying attention.

“We are going to use the ballot box and the democratic process to stop all hunting in the United States. We will take it species by species until all hunting is stopped in California. Then we will take it state by state.” (Full Cry Magazine, 1 October 1990).

The stark reality is that Pacelle will never be satisfied with a simple “ammunition change” to meet whatever junk science parameters he used in his petition. He will only be satisfied when hunting is outlawed entirely.

What morons like Wayne Pacelle fail to comprehend is the scientifically proven fact that hunting is part of a sound wildlife management system. It is the ONLY way to ensure healthy populations of deer and other prey animals can thrive.

Overpopulation of a species kills that species; a fact proven repeatedly in North America.

As the Michigan Wildlife Conservancy says in their series titled “When There Are Too Many Deer”,

Deer have demonstrated the capacity to eat themselves out of house and home.

The Noble Foundation, a nonprofit advocating for agricultural productivity says

“The only relatively efficient means to manage deer herd numbers other than habitat modification is through managing hunter harvest (i.e., contemporary predation).”

But Wayne Pacelle doesn’t care about your family, either.

Selling ignorant politicians on the notion hunters will not “compromise” on lead bullets is a straw man. Hunters and gun owners have compromised endlessly. What we will NOT do is pander to someone’s agenda when they have no actual science to back up their bogus claims.

“Traditional ammunition” is not the problem. It never was. It’s simply the latest catchphrase in the war on hunting; an effort to pain us as unreasonable when the opposite is true.

Hunters and hunter organizations are the primary, indeed almost the only, driving forces behind habitat and animal conservation.

The reason is simple. It’s in our own best interests to ensure a healthy habitat as that ensures healthy animals to harvest and feed our families.

But Wayne Pacelle would paint those conservation efforts as “inhumane”.

I would suggest Wayne Pacelle is, at best disingenuous, at worst a flat-out liar willing to say anything to get his way.

That’s not the type of person who should set public policy.

The National Shooting Sports Foundation made an excellent point in their article “Hunting on Public Lands at Risk”:

The 50 page-petition is littered with junk science and fails to make the case that the use of traditional ammunition is a threat to wildlife populations or to humans that would warrant such a drastic action.

Are we really to believe USUS finds hunting acceptable just so long as hunters use alternative ammunition?

We know better than to trust HSUS with setting hunting policy for the entire country. But we can’t assume the Obama Administration’s Interior Department is on our side.

Call Interior Secretary Sally Jewell today at 202-208-3181 and tell her to reject this scientifically baseless petition from HSUS to ban traditional ammunition. Let the Department of the Interior know that requiring the use of alternative, non-lead ammunition, is nothing more than a back-door way to ban hunting by raising the price of participating in an American sporting tradition. Make sure to tell them: