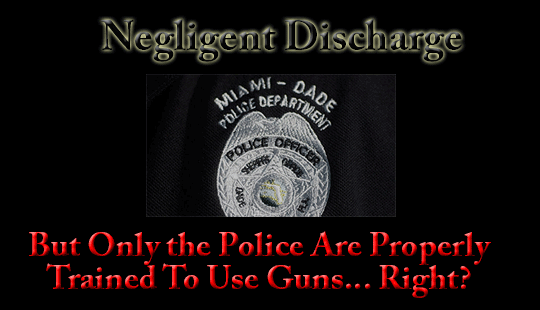 I’m sure it’s every cop’s worst nightmare. Handling a firearm and it “just goes off”. Except that’s not what happens. A firearm doesn’t “just go off”. Someone puts their finger on the trigger and pulls it. Then the gun “just goes off” precisely as it is designed to do.

When this happens unexpectedly it is called a negligent discharge. Someone was negligent in their attention to safe gun handling practices. It is NOT an accident.

A police officer mistakenly fired his rifle Wednesday morning while in a Miami courthouse in front of a judge.

A Miami-Dade Police Officer, according to police, was demonstrating a scenario to a judge during a training exercise on the 30th floor of the Lawson E. Thomas Courthouse around 10:30 a.m. Wednesday when he accidentally fired a single shot from his department-issued rifle, an AR-15.

The bullet hit the floor, leaving a hole about the size of a fingertip in the carpet near a sofa in the hallway.

I’m sure everyone in the courtroom at the time this cop negligently discharged this rifle needed a change of underwear shortly afterward.

I’m not saying cops are the only ones who negligently discharge their firearms. Far from it.

I’m simply pointing out that those who believe police are endowed with magical powers are thoroughly out to lunch.

Police who do not follow safe gun handling rules are a danger to themselves and others.  It doesn’t matter that they didn’t mean to be dangerous… the fact remains they were and that is what must be of paramount importance.

A negligent discharge can happen to anyone, anywhere at almost any time.

That’s why we firearm owners insist on the basic rules of safe gun handling…. so that, as in this case, when things go horribly wrong due to our negligence nobody is injured or killed.