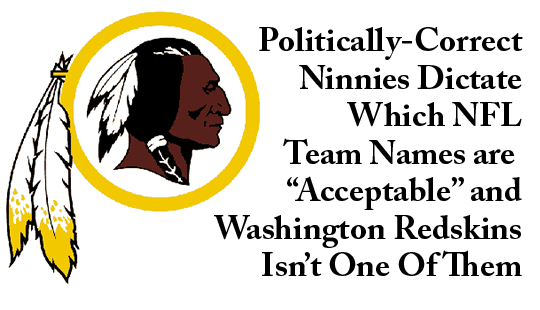 The Washington Redskins are a football team which has operated under this name since 1932. A bunch of nanny state ninnies decreed the term “Redskins” is derogatory and the team should be stripped of its name.

An article in Politico made a big deal about this, quoting such authorities as Harry Reid as if that lends legitimacy to the stripping of trademarks held by a business.

“This decision is a step forward for Indian Country and for all Americans who champion tolerance.”

“I don’t know how many times he needs to be told that the name is disparaging. I understand he says he’s going to appeal. Shame on him,” she said in an interview. “I mean, does he like losing?“

What I find fascinating is the people complaining loudest about the name “Washington Redskins” in this entire article are old white folk pandering to their own sense of political correctness. It is not until the very last paragraph of the article’s first page that an actual native is quoted.

“I hope this ruling brings us a step closer to that inevitable day when the name of the Washington football team will be changed,” said Blackhorse v. Pro Football, Inc. plaintiff Amanda Blackhorse. “The team’s name is racist and derogatory.“

I can’t imagine any pro sports team owner would name their team something derogatory. It simply does not make good business sense.

If you despise a segment of the population based on their race, why on earth would you name your team after them?

The answer is simple. You wouldn’t.

“I admire the Redskins name. I think it stands for bravery, courage, and a stalwart spirit and I see no reason why we shouldn’t continue to use it.”

There are always those who look for ways to be offended. They will always find them, since that is their focus and intent. They wish to be labeled “victim” and will go to great lengths to prove their own sense of victimhood.

It matters not that there is no derogatory intent, or that in fact the opposite is the case. In our age of politically correct nonsense the mere fact that someone is offended means you are wrong and they are right.

The Washington Redskins have operated under that name since 1932.

The team has already won previous petitions to cancel their trademarks, which does make me wonder about the legitimacy of the current proceedings. Since this very same board dealt with this issue in 1992 and found in favour of the Washington Redskins the question that springs to mind is this: How many times must a company defend itself against the very same charges? As many times as it takes for their opponents to find favour?

That certainly appears the case here.

The United States District Court for the District of Columbia was very clear when it overturned the previous ruling against the team.

The TTAB’s finding of disparagement is not supported by substantial evidence and must be reversed. The decision should also be reversed because the doctrine of laches precludes consideration of the case.

Sadly those perennial complainers, professional victims and their advocates like Harry Reid, Maria Cantwell, Jon Tester and Eleanor Holmes Norton will never stop until they get their way. It matters not that someone’s Rights are trampled underfoot. These buffoons claim moral superiority and anyone offending their delicate sensibilities must be punished.

I, like team lawyer Bob Raskopf, believe this decision will also be overturned on appeal.

“We’ve seen this story before. And just like last time, today’s ruling will have no effect at all on the team’s ownership of and right to use the Redskins name and logo,” he said in a statement, citing rulings in 1999 and 2003. “We are confident we will prevail once again, and that the Trademark Trial and Appeal Board’s divided ruling will be overturned on appeal.”

This preoccupation with “hurt feelings” is… well… just that; a bunch politically-correct nonsense perpetuating the myth that every term they don’t like is ipso facto “offensive” and “derogatory”.

That pretty much leaves a few perennial complainers and some old white folks desperately trying to win political points who dislike the team’s name.

Sadly for both the Washington Redskins and the overwhelming majority of Native Americans, their opinions mean nothing.

This is, after all, the Arena of Political Correctness and that’s no game.