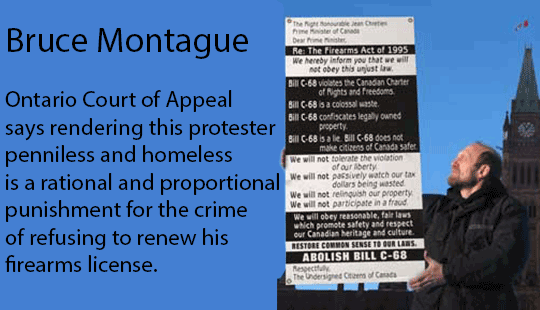 My name is Donna Montague. I am married to former Ontario gunsmith Bruce Montague.

I have had Enough!

I am thoroughly disgusted!

It is bad enough that the news media reports inflammatory positions about Bruce without verifying their data ….. but the “JUDICIARY” is doing it too.

Now that the trial is over I can speak.

The search of our home:

The charge against Bruce of being a danger to society was found NOT GUILTY by the jury.

Character witnesses, a crown contracted background check, and even OPP officers who knew him, when cross-examined testified and stated that Bruce is an upstanding citizen. Bruce worked on a lot of OPP and local police firearms and serviced police departments as far away as New Jersey. At the time of the raid he had a handgun form a Kenora Crown Attorney and an OPP rifle. Yet Bruce is continually slandered.

I, his wife would not remain by his side for over 35 years, and through all this, if Bruce was of the character the judiciary is insinuating. Bruce is a help-your-neighbour kind of guy. I can’t imagine anyone who knows him saying otherwise.

You know we ran a gunsmithing shop and retailed firearms. We didn’t have as many firearms as most firearms stores do. Now the government wish to take what was our small store’s inventory It was not an arsenal! – it is our life’s savings!

Now, after the criminal portion of our case is over, the Crown wants to seize our home – paid for with inherited money from my father and built by our family. This is extreme, overboard and unreasonable!

This game of media defamation is disgusting. You jury members and those who attended the trial, you know the whole story. You can share what you learned in the trial. This is spinning out of control – It is like politicians with their smear campaigns at election time.

Please! Stand Up! Speak! Don’t be silent and let this atrocity continue.

P.S. I have had a lot of response to my letter in the newspaper. People are asking me how they can help with letter writing. We would appreciate your letters to be cc’d to:

Some points to consider in these letters may be: