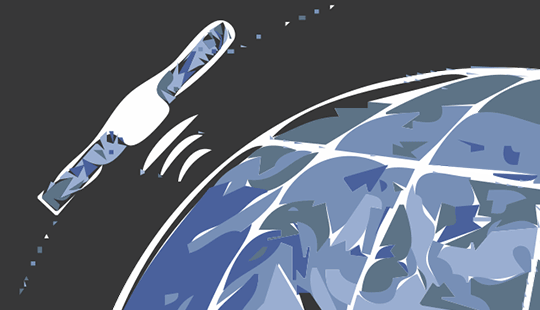 In 1978 NASA launched the International Sun-Earth Explorer-3 (ISEE-3) into orbit between the Earth and the sun. Designed to give scientists a look at “solar wind” before it reached earth, the ISEE-3 was abandoned 17 years ago by NASA. It’s wandered the interior of the solar system alone ever since.

From the NASA website’s page on the ISEE-3:

Goals: International Sun-Earth Explorer-3 (ISEE-3) was to investigate the solar wind and its interaction with Earth’s magnetic field, among other phenomena in interplanetary space. It was later renamed International Cometary Explorer (ICE) and used to study two comets during an extended mission.

Accomplishments: ISEE-3 was the first spacecraft to orbit the Sun at L1, a location in space where an object remains directly between Earth and Sun throughout its orbit. Coordinated with the two Earth-orbiting satellites in the International Sun-Earth Explorer (ISEE) program, ISEE-3 enabled scientists to measure solar and geomagnetic phenomena from different points in time and space. It was the first spacecraft to monitor the solar wind approaching Earth, and continued the investigation of cosmic rays and solar flare emissions in the interplanetary region near Earth’s orbit.

On August 10, 2014, the ISEE-3 will catch up to and then pass the Earth precisely as its flight designer intended. Robert W. Farquhar is the brilliant mind who designed a way for ISEE-3 to end up near Earth, passing just 30 miles above the surface of the Moon.

The year Robert Farquhar sent the last command to the spacecraft to set on its current path?

Using the gravitational pull of the moon, Farquhar envisioned a space shuttle could retrieve the ISEE-3 and bring it back down to earth. Clearly a man with long-term vision, Farquhar couldn’t know he would still be alive when the spaceship completed the journey he set it upon almost 3 decades ago.

Still in good working order after an astounding 36 years in space, a group of civilian scientists are determined to bring the “zombie spaceship” home.

So while the spacecraft itself was never “turned off” our ability to communicate with it was.

In 2008 NASA trained its Deep Space Network on the distant location of ISEE-3 and heard its carrier frequency. The ancient spacecraft was still alive, but in 2010 NASA decided reviving its ability to communicate with the space vehicle would not be worth the time and money required.

A Facebook page promoting the ISEE-3 noted that while building new transmitters was quite possible, nobody at NASA was willing to spend the money.

It was that line that caught the attention of Dennis Wingo, an engineer and entrepreneur whose passion is reviving projects long given up on by NASA.

“We call ourselves techno-archaeologists. Not only is it not impossible,” Dennis Wingo said, “I think it can work, and I know how to do it. No one else was going to do it and it seemed like the right thing to do.”

This team of “techno-archaeologists” led by Dennis Wingo are working out how to command the space vehicle but this is not without substantial difficulties, as you might imagine. There is no operating manual any longer, and the fragments they’ve pieced together sometimes contradict each other.

This is hampered by the fact that in 1999 NASA updated its Deep Space Network. This is a series of radio telescopes used to communicate with distant space probes. Part of this upgrade meant they tossed away all the transmitters capable of talking with ISEE-3.

With the deadline for the craft passing earth upon them, Dennis and his team had, by the end of May, communicated successfully with the space vehicle, making his company Skycorp the first private company to command a spacecraft outside Earth’s orbit.

That’s pretty exciting stuff, and I can’t wait to learn whether Dennis Wingo and his team are successful in their bit do control it and bring the “zombie spacecraft” home.

NOTE: Follow the progress of Dennis Wingo and his team’s revival of the ISEE-3 at http://denniswingo.wordpress.com/