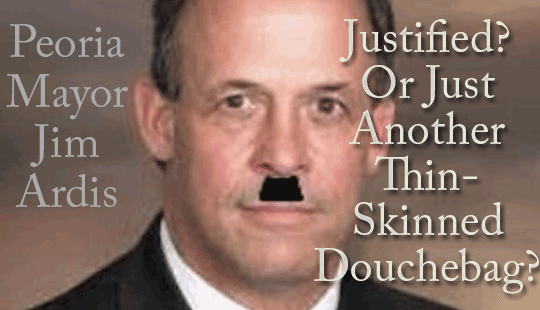 Peoria Mayor Jim Ardis: if you can’t handle being mocked stop being a politician.  Mocking and ridicule come with the territory so either get a thicker skin or get yourself a new job.  Wasting police resources to harass those who oppose you is the act of a tyrant, not a mayor.

Peoria Mayor Jim Ardis was so worried about a parody Twitter account with all of 50 posts and 50 followers he sent the Peoria Police Department on a 3-week chase of the heinous offender who created @peoriamayor (now defunct).

Violating the rights of this mere citizen is not only condoned but demanded by Mayor Jim Ardis.  Freedom of Speech exists only for Jim Ardis, I suppose, and not for any of the citizens he presides over.

When police finally found the man responsible for mocking their mayor, one Jonathan Daniel, they descended like good little Police State thugs, with all the might they could muster.  Since Jonathan Daniel committed no crime they dug through his possessions (illegally) until they found some marijuana.

They arrested Jonathan Daniel’s roommate, charged him with possession and held him on $3,000 bail, after seizing iPhones (2), XBox game controllers (2), private mail, digital memory cards and “drug paraphernalia”, whatever that means.

Presumably one of the cops needed new XBox controllers for his own system?  Can’t imagine how else they can rationalize the seizure…

The only reason Daniel faced criminal charges at all is they had to charge him with something… how else do they justify this massive waste of police time and resources?

The crime of mocking one’s mayor is… well… no crime at all.  Freedom of expression protects we mere citizens from such attacks by the overzealous minions of the state, or at least they ought to and that’s the point behind the lawsuit filed by Jonathan Daniel.

From March 9 through March 19, 2014, Mr. Daniel tweeted from a Twitter account, @peoriamayor, which used a picture of Jim Ardis (“Ardis”), the mayor of Peoria, as the account’s avatar. Displeased with the content of the tweets, Defendants embarked on a plan to shut down the account and identify and punish its creator in violation of his constitutional rights. As part of Defendants’ plan, Peoria Police Department officers searched Mr. Daniel’s residence, seized his personal property, reviewed personal information on Mr. Daniel’s electronic devices and in his mail, and arrested, detained, and interrogated Mr. Daniel purportedly for the crime of false personation of a public official.

Good for Jonathan Daniel for standing up for himself in the face of such blatant abuse of power.

If there is any sense of actual justice left in Illinois (and I wouldn’t bet on it given 3 separate judges issued search warrants in this case) then Jonathan Daniel’s win will be a slam-dunk.