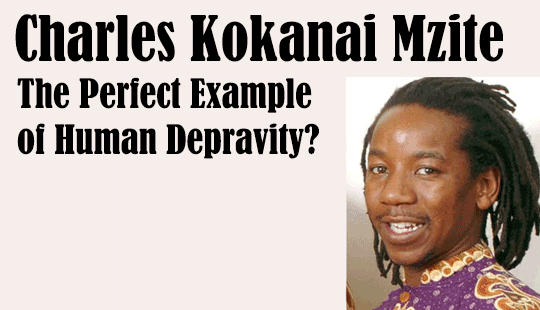 Charles Mzite is a convicted sex offender. In 2009 his trial on 4 counts of aggravated sexual assault resulted in a conviction and a 10-year prison sentence.

This depraved HIV-positive immigrant from Zimbabwe came to my attention about a year ago when his human rights complaint was tossed by BC Supreme Court Justice Harry Slade.

Mzite deliberately lied to at least 4 women, assured them repeatedly he did NOT have HIV and had sex with them. He successfully infected one of the women with the disease.

As I wrote in September 2013 in my article about the degenerate Charles Mzite:

He repeatedly violated the rights of four women, placing them all under a potential death sentence, and he did so willingly. He gave no thought to the consequences to those women or the catastrophic effect his selfish acts would have on their lives.

He misled and outright lied to these women to convince them he was not HIV-positive, and kept denying it until he was arrested. At that point he finally admitted he knew he was HIV-positive and had known it as far back as 1995.

What an utterly depraved specimen of humanity and a repulsive example of manhood.

That article also contains the full depth and breadth of the depravity of Charles Mzite, taken directly from court records in case you think I’m overstating his crimes.

“There was some basis in this case for the decision to accept the complaint after the expiry of the six-month period afforded by the [human rights] code,” wrote Justice Peter Willock in the ruling.

“It cannot be said that the decision was patently unreasonable. I would allow the appeal, set aside the order made by the judge and remit the substantive complaint for consideration by the tribunal pursuant to the code.“

I can find no confirmation that Charles Mzite was ever deported, so presumably Canadian Taxpayers are still on the financial hook for feeding, housing and clothing the degenerate sex offender.

Now, thanks to the BC Court of Appeal and their lack of common sense, we are on the hook for another expensive human rights complaint where the BC Human Rights Tribunal will do what it does best.

They will undoubtedly for the complainant, hand him a massive cash settlement and leave his 4 sexual assault victims wondering why they even bothered to come forward to prosecute Charles Mzite for his heinous crimes.