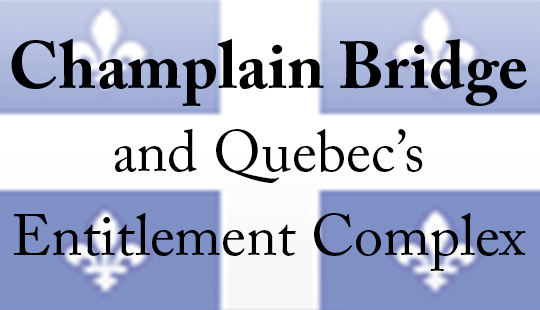 Montreal’s Champlain Bridge in is falling down. With a design described as “flawed from the outset” it’s surprising the bridge stayed functional this long. Nobody argues the fact this bridge must be replaced.

The only issue for Canadians, all Canadians, is who will pay for that new bridge.

I cannot think of a single reason why taxpayers outside of Quebec ought to pay for the new Champlain Bridge. It’s municipal infrastructure, not provincial or federal.

Justin Trudeau can, of course, and his rationale is the same as for every other Quebec project. Canada owes it to Quebec for their decision to grace us with their presence in Confederation.

The spoiled child with no job experience, no leadership experience and no clue about anything except Quebec’s entitlement to the contents of the rest of the nation’s wallets, Liberal leader Justin Trudeau parrots, indeed embodies Quebec’s sense of entitlement.

Anything Quebec desires Ottawa (and by Ottawa I mean the rest of Canada) must pay for. It’s the Quebec way.

The government of Quebec, Justin Trudeau and Thomas Mulcair all demand, not that Canada subsidize the costs of a new Champlain Bridge, but that we pay for it outright.

If Quebec gets is way the Government of British Columbia is fully justified in demanding Ottawa pay the entire construction costs of both the Golden Ears Bridge ($1 billion) and the new Port Mann Bridge ($3.5 billion), as both were constructed without a single federal tax dollar.

Both British Columbia bridges were constructed and paid for using tolls.

While I despise the notion of paying a second time for the construction of a bridge my taxes are already supposed to cover, BC didn’t ask anyone else to pay for our bridges. We asked for no handouts from Ottawa. We paid our own way, just as Quebec should with the Champlain Bridge.

I’m surprised Stephen Harper made the offer to build the new $5 billion bridge at all. That he did so is very generous. In asking Quebecers pay back that cost over time through tolls on the new Champlain Bridge Harper is painted by Quebec politicians as harsh and unfair.

Every one of them, their sense of entitlement freshly buffed and shined, demands the rest of Canada pay Quebec’s way.

What is bizarre about their combined position against tolls to pay for the construction of the new Champlain Bridge is the Oliver Charbonneau Bridge connecting Laval and Montreal is a currently toll bridge. The existing Champlain Bridge was a toll bridge until the 1970s.

This is NOT a new concept for Montreal despite the hypocrisy of Montreal’s Mayor, Quebec’s Premier and the two opposition windbags, all of whom scream how unfair this is.

If you believe, as I do, that Quebec ought to pay its own way for a change tell Prime Minister Stephen Harper your thoughts. Send him an email at pm@pm.gc.ca and tell him no Federal tax dollars for the Champlain Bridge project unless those construction costs are repaid, in full, through tolls.

While you’re at it, please copy your message to Prime Minister Harper to both Liberal leader Justin Trudeau (justin.trudeau@parl.gc.ca) and NDP leader Thomas Mulcair (thomas.mulcair@parl.gc.ca).